Urbanisation, although an indicator of development, comes with a set of challenges to a nation. According to the World Economic Forum, cities will face five major environmental threats, resources, inequality, technology and governance.

With the rapid rate of urbanisation, there’s an immediate need for a proper and inclusive urban planning solution.

CEM 2021 is a 30-day expo for city makers to showcase their solutions for cities from Nov 8-Dec 8, 2021. The expo will also feature a 5-day forum for the public to watch and learn everything about cities.

Before tapping further into the event’s details, the President of MIP, Datin TPr Noraida Saludin, shared with @green some major urbanism themes that Malaysian cities are focusing on.

“The major one would be the concept of placemaking, the idea of turning spaces into places. They are two different things here.

“If it is just a space, it could be just a space. If it’s a place, then it’s activated with people. To activate that, you’ve got to put in activities, and the activities will have to be something that people are inclined towards.”

She said placemaking was the in-thing for the past two years as many cities in Malaysia have implemented it. Along the way, she revealed Malaysia was also looking at creating healthy cities and smart cities.

“Whatever the management wants, people who do designs have no choice and have to do it,” said Imran.

“So, we’ve seen situations where they build a skate park, but an expert in skate parks does not design it. So, what you’ll have is that you end up with this space that nobody uses because it was not designed by an expert.

Since city design and city management are essential in people’s lives (though they may not see it), Imran said there’s a need for deeper engagement with people to get their feedback. It will provide the stakeholders with a clear picture of what’s happening and tapping into people’s understanding of city issues.

“Engagement is a handy tool in town planning,” he said.

Imran said CEM 2021 was conceptualised in 2020. It was something that MIP wanted to put together, considering there weren’t many platforms available which deep-dive into city issues and connect different stakeholders.

He said some conferences discussed specific parts of cities, but none of them went across different industries.

“City Expo Malaysia became this platform where we could bring together multiple stakeholders and unite them in this discussion about where our cities are going or what had happened in the past and so forth,” said Imran.

Added Noraida: “It is also in line with 100 years of formal town planning in Malaysia. So, we thought it would be opportune to showcase and put together everything concerning cities at one place, one platform and one venue.”

Noraida shared the expo was supposed to be held physically at first, but the organisers had agreed to move it entirely virtual due to the restrictions caused by the growing cases of Covid-19. It was unfortunate, but Noraida said going completely virtual could give the expo more worldwide exposure.

“We wanted it to showcase everything that is in the past, present and future of cities. We’re looking at all sorts of aspects to the city, whether it’s technology, green, heritage, culture, environment, or all kinds of things.

“You just go there, and you get everything about the city in one place!” said Noraida.

Imran believed CEM 2021 would be a platform that unites stakeholders involved in city design and city management. These stakeholders could come together and discuss various issues about city planning.

“For example, one of the most significant issues we are facing now is where our cities are going post-pandemic. Have things and people’s perceptions or relationships with space changed or not? Are our policies able to adapt quickly to adjust to the new norms?

“A lot of cities are a slower indicator of change. But we’re starting to see different trends, for example, with commercial spaces becoming emptier, what will happen to all these things?

“Planning is more than just looking at it from a top-down perspective. It deals with people, real challenges, real places. There’s a need to be very forward-thinking in this sense.

“So, the only way we can get a real analysis of what’s happening on the ground is if we bring the people who are managing the cities and designing the cities to come together and have that sort of discussion.”

With CEM 2021 being virtual, the expo could attract global audiences and international speakers to participate and share their knowledge. Imran also mentioned that there would be a networking lounge where attendees could pitch ideas and discuss things with other people worldwide.

Learning opportunity at the virtual expo

Noraida agreed that after two years of the pandemic, many things need to be changed and reevaluated.

“The expo will provide a platform to exchange ideas and to learn from each other on how cities were affected by the pandemic,” said the MIP  President.

She added that there were many learning and re-learning opportunities at CEM 2021 as the people involved in the expo were planners and technology providers, local authorities, etc.

Besides the pandemic, she said stakeholders could also learn about environmental degradation in many places, including the cities.

“We’re not just talking about re-learning about pandemic or urbanisation. We’re talking about sustainable development. How other cities are dealing with it and what’s the best practices and examples.

“Now that we are in the advent of technology, there’s a lot of opportunities for everybody involved with cities to go and see what’s available out there.

“With the City Expo Malaysia, it’s not just the expo exhibition. We’ll also be having a five-day, fully packed forum. The expo is going to be free,” said Noraida as she emphasised there’s no limit in time with it being virtual, and people could access it from wherever they are.

On the reason for the collaboration, Noraida revealed that MIP believed Nextdor went deep into things that could touch the hearts of many people.

“The passion that Imran and Anne (Lourdes) have for placemaking touches the lives in the city.

“Placemaking is about activating places and public spaces, and that’s the core in MIP. At MIP, town planner’s work touches lives.

“It’s not just about spaces, but it’s about creating places,” said Noraida, adding that people at Nextdor have different aspirations and understanding beyond properties. 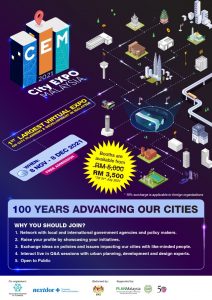 Your way towards environmental sustainability