“I can gout no satisfaction!”

Over a recent weekend I was in Ipoh to attend a three-day symposium on the music of the 60’s era.

I was asked to present a paper on my teenage experience during that decade when Elvis Presley, Cliff Richard and The Shadows, and The Beatles influenced our lives with their music and electric guitar instruments. The local Malay pop music then was dubbed “Era Pop Yeh –Yeh 60an”, after the Beatles hit song “She Loves You (Yeh! Yeh! Yeh!)”.

As in most conferences, food and drinks were abundant, and exercise was far from my mind. As it was also raining, it was a convenient excuse not to exercise, although the hotel had a complete gym facility.

I was gouging beef curry, chicken, fish and prawns. And on my return to Kuala Lumpur, I had an attack of gout on my left foot, something I have not had for a long time.

I knew that to reduce the inflammation, I had to go vegetarian for the next few days, drink lots of water, and of course, return to my cycling routine to sweat out the toxins from my system. It also helped by taking 10 pills of colchicine, using a brand that was herbal-based. At only RM2.40, I took two pills every two hours and the next morning, the swelling and pain had subsided.

The same thing happened last year during the lockdown when I had too much to eat and lacked exercise.

Nonetheless, I still had to stay away from beef and protein for a few more days.

Most people do not understand the cause of gout. My brother has been having chronic gout for the past 10 years. Although he is a fitness buff, he has a problem with food – the wrong kind.

Although he runs and does taichi to sweat on a daily basis, he also tends to overdo it. This inflicts stress on his joints and that triggers the inflammation. When that happens, he will suffer in pain and be bedridden for a few days.

Gout is a condition that affects many people, especially men. It is a form of arthritis that is complex. It affects one or more joints, mostly the big toe. It is painful and characterised by swelling and redness of the affected areas.

This happens when there is too much uric acid in the body. The uric acid is made by the body when it breaks down purines found in certain foods. 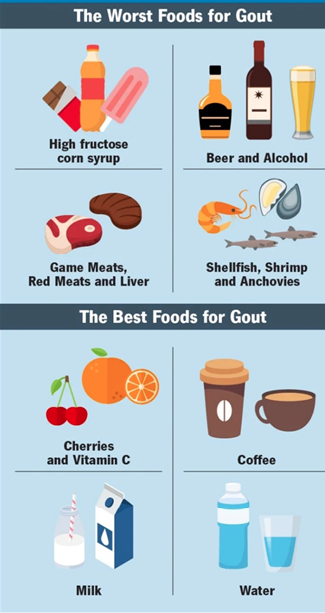 These foods include sugary drinks, organ meats, red meat and certain seafood including herring, mussels, tuna, trout and codfish. My doctor and dietician advised me to avoid anchovies, mackeral, catfish, patin fish and even stingray, as they have high purine content. It’s quite a challenge to avoid eating these as they are found at our local food stalls and in our favourite foods such as nasi lemak and nasi kandar.

We must also avoid eating nuts and green beans and even spinach. How to avoid satay and its gravy of nuts?

Well, the way I manage these foods is to consume them in moderation and a change in my lifestyle which I practised more than 15 years ago when I had my first gout attack. It was my boss at that time who told me about the problem as he was already affected. Small wonder given that he was already overweight and besides his diabetic condition, was on drugs and medication.

At that time, I refused to accept drugs as a cure, and my dietician advised me of the lifestyle change and to exercise. The fastest way to sweat it out was to take a long ride on my motorcycle to Penang. After a few days there, minus the nasi kandar temptation, I did not have to worry about gout anymore.

The tip for sustaining a gout-free condition is to ensure a healthy weight that fits your height as overweight people are prone to not just gout but also diabetes. It is true when they say, gout is an early sign of diabetes which can also lead to high blood pressure and stroke.

One must drink at least two litres of water daily to flush out the toxins. And sugar free and regular caffeinated coffee also help lower gout risks.

Ginger is known to help with indigestion, ease nausea, and help with inflammation. In one animal study, it was found that ginger helps to lower uric acid levels in subjects who consume ginger regularly. I drink ginger water on an empty stomach every morning.

Lemon juice also helps balance uric acid levels and makes the body more alkaline. Tumeric, broccoli and bak choy are also recommended. Definitely, these are not popular among foodies and as my elders used to say, the best cure for any ailment is food that is not so delicious and not popular. Papayas, cucumbers and avocados are a tastier alternative.

Do things in moderation

Recently, I went to a kenduri with my classmate who was reluctant to drink water while we were driving because he wanted to avoid going to the toilet.

That clearly is a mistake as he also has heart problems, is definitely overweight, and refuses to admit it. His body is certainly toxic as he consumes a cocktail of pills daily. And these are seen in the symptoms that he suffers from – tiredness, vertigo, swollen feet and so on. Exercising or walking at least 5,000 steps daily is not in his vocabulary.

He will not even walk to his neighborhood shop or the mosque only 100 meters from his house. He rides his Honda. It is an attitude problem.

I always point out to them the example set by our grand old man, the 97-year-old Tun Dr Mahathir who is still healthy, cycles, drives and throws a mean punch, politically speaking. His famous motto when it comes to food is – berhenti sebelum kenyang – stop eating before your stomach is full.

At the end of the day, life should be treated with moderation. As we grow older, we should be calmer and more patient to avoid stress, as that too can cause gout.

When I look at my friends during our class reunions, weddings or even at funerals, the topic will always turn to health issues. I feel lucky and thankful to be able to feel as fit and active as I was,15 years or more ago.

Never let our mind take over our body by saying that I need a rest or its too hard to do physical work. I always take it as a challenge that I can overcome it – and that is where the satisfaction is achieved.

I guess Mick Jagger and the Rolling Stones are still rocking it around the world because they “can get no satisfaction!” Setting high standards for themselves make them the most happening rock group in the world and the grandad of rock. – The Health

ADI SATRIA, a veteran of marketing communications, believes in a balanced and healthy lifestyle, achieved in moderation and will not let a little gout get in the way.

When a child becomes aggressive