Why sleep is important

Lack of sleep can lead to other medical conditions such as weakening of our immune system, increasing the blood sugar level in our system, and blocking of coronary arteries

For many years, I thought sleep was something I could sacrifice to meet deadlines. In this day and age, where we never seem to be offline, being able to work with less than the recommended number of eight hours of sleep might be considered by some to be a badge of honor.

I have discovered that this is a dangerous path to take. I have been fortunate to work in Europe, North America, and Asia for well-established international organisations. I mostly survived on five to six hours of sleep a night.

Since I decided to step away from full-time employment, I have taken courses on brain science. A common theme of every course has been the importance of sleep. Let me share with you what happens when we sleep and why it is important.

1. During the day, toxins are created in the brain. There are a number of reasons for this. We have 87 billion cells in our brain. When we are stressed, for example, a chemical called cortisol is released by the gut and transmitted to the brain. The build-up of toxins will cause damage to the brain if it is not removed. Our brain has a self-cleaning mechanism called cerebrospinal fluid (CSF for short). When we sleep, and only when we sleep, CSF is released into the brain. CSF removes the toxins in the brain so that the brain can keep working at optimum capacity. If we do not get enough sleep, then the toxins may not be removed. If toxins remain in the brain, a plaque called amyloid beta is formed around the brain cells. Scientists have determined that one of the causes of Alzheimer’s disease is the build-up of amyloid beta in the brain. “As we get older, the ability to clear toxins is diminished,” says Professor Michael Chee, a director of the Center for Cognitive Neuroscience at Duke-NUS university. That is why it is important to get enough sleep throughout, especially when we are in our thirties and forties.

2. There are two types of sleep -REM or Rapid Eye Movement and Non-REM. When we first fall asleep, we are in non-REM sleep. During this phase, the brain goes through its maintenance processes -i.e CSF is released to clear the toxins; unused brain cells are pruned (i.e. removed from the brain). When we get to REM sleep new connections that were made during the day are transmitted from the hippocampus (a seahorse-shaped structure in the brain) to other parts of the brain. So, if we are a student for example, whatever we learned during the day is stored in the hippocampus. When we sleep, or more specifically, when we are in REM sleep, the new information which was stored in the hippocampus is distributed to different parts of the brain for future use. If we do not get to that stage of sleep, then potentially we will forget what we learned very quickly. It is important therefore that we get sufficient REM sleep so that apart from the maintenance process, which is important, the brain can also develop these new connections. 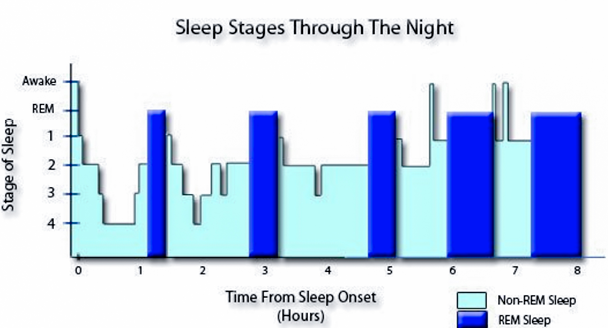 A typical sleep cycle is as set out in the chart above. The chart shows how important it is to get the full eight hours of sleep that is typically recommended. The large bulk of REM sleep occurs between the sixth and eight hours of a sleep cycle. If we have less than six hours of sleep daily, we are not getting the full amount of REM sleep. The important processes that take place only in REM sleep (committing new learnings to memory for example) will be sacrificed.

3. Research has also shown that lack of sleep can lead to other medical conditions such as weakening of our immune system, increasing the blood sugar level in our system, and blocking of coronary arteries which can lead to a heart attack. In Greece in the year 2000, the government decided to abolish nap time during the day. Subsequent studies found an almost 40 per cent increase in the risk of dying from cardiovascular disease (for men, the increase was 60 per cent).

We know, therefore, that sleep is important. But why do we feel sleepy and is there anything we can do when we feel this way?

Sleep is caused by a chemical called adenosine. When we wake up after a good night’s sleep, our adenosine level is low. As the day progresses, the adenosine levels increase. As it increases, we progressively get tired and start to feel sleepy.

Typically, the adenosine level is at its peak at around 11pm. Having a short nap during the day can help our energy levels increase. The late Margaret Thatcher, the former Prime Minister of Britain was a big believer in power naps.

She mentioned in many interviews that she was able to keep alert because she took power naps during the day to reenergise her mind and body. Of course, there are stimulants that one can take to stay awake even if our adenosine level is high. The most common of course is caffeine.

Caffeine, however, does not reduce our adenosine level. It simply blocks adenosine from reaching the receptors in our brain. The adenosine will continue to build and once the effect of the caffeine (or whatever other stimulant that we take) wears off, we will literally feel knocked out. In a normal situation, it takes eight hours for the brain to clear adenosine from the system.

Here are some simple but effective tips for getting a good night’s sleep.

Why do we feel sleepy when on a flight?

Have you ever felt sleepy when on a long flight? This has nothing to do with adenosine. When we are on a flight, the cabin pressure is reduced to simulate being at an elevation of 6,000 to 8,000 feet.

At this level, oxygen levels are lower. The blood absorbs less oxygen and hence we feel sleepy, and we lack mental alertness. So don’t leave important tasks for that long flight that you may have to take for work. – The Health

Tony Pereira is an Independent Consultant and Founder of SuperTrouper365

Eating your way to good health