A sustainable flight is a dream for the development of modern aircraft. However, most existing aircraft use aviation gas (AVGAS) as an energy source and contribute to the harmful environmental issue, so-called carbon emission contribution on the sky.

Hence, it would trigger the increment of global average temperature over the year that will significantly affect climate change with air transport worldwide. The data global airline industry shows that 4,723 million passengers used air transport over the whole year before the pandemic (pre-Covid-19).

Nevertheless, the number has decreased to 1,763 million passengers during the post-Covid-19 in 2021. The number will increase drastically when the pandemic ends.

Let’s look at the positive side of introducing Clean Sky Joint Undertaking (CSJU), a public-private partnership between the European Commission and the European aeronautics industry that regulates and finances research ventures to produce significantly more reserved and numerous environmentally favourable aircraft.

One of the elements in the four focus areas or subsectors outlined in the Malaysian Aerospace Industry Blueprint 2030 is the Aero-Manufacturing, where the aerostructure focuses on the employment of composite and metallic materials.

The composite would be an excellent replacement for the conventional metallic or aerospace alloys aircraft components such as fuselage, wing, tail, and engine pylon. The utilisation of composite structures in aircraft manufacturing has led to less weight and reduced the AVGAS consumption for aircraft propulsion.

But, how is this approach eachable in the timeline? According to NASA, green aviation is a terminology adopted to represent exercises in the business that improve aircraft efficiency and reduce noise contamination and greenhouse gases, which drops carbon emissions.

On the strategic insight, this application has increased the aircraft endurance for long-range operation, especially for lowering the travelling cost in this era. Moreover, researches on multifunctional composite structures seek the advancement in combining structural-energy functions.

Thus, enabling the structural capabilities, i.e., load-bearing and energy generation/ storage application. One of the focuses in the structural-energy topics is the piezoelectric energy harvesting technology.

In another perspective, the development of UAVs has been of concern for military applications for several decades. The focus lately was on creating small UAVs, known as micro (<10 cm in length) or mini (10-30 cm in length) UAV, which can be small enough to be carried and deployed by soldiers in the battle territory.

A small military UAV is specifically designed to deliver steadfast intelligence, surveillance, reconnaissance and targeting (ISRT) missions. Some people, especially at the top strategic management, may question its feasibility for this purpose.

However, they can be designed to fulfil several distinct duties. One limitation of currently available mini UAVs is their endurance or best flight conditions. In addition, mini UAVs are tiny and lightweight.

Consequently, they cannot be regulated with some large fuel payloads during the flying. Specifically, in electric-powered mini UAVs, the rechargeable batteries are utilised to propel the aircraft, often comprise a substantial number of the overall aircraft mass, so increasing the battery size to enhance endurance is not feasible.

Additionally, an energy storage scheme with a multifunctional structural battery in the WASP pack and the Black Widow UAV would be applied for this intention.

Indeed, nature is a special gift to humankind. For instance, the air would generate a mechanical movement through this vibrational motion and trigger the structural deflection on an object depending on its shape and sizing.

The concept is straightforward; a travel freestream air carries energy that would be transferred when it interacts with a structure and, consequently, excites its particle. The design may be excited to the maximum deflection peak once its exciting frequency is near the natural frequency.

Simultaneously, the atmospheric conditions such as temperature, air density, gust flow may differ based on the altitude from the sea level. Thus, the amount of harvested energy may vary due to the exciting mechanism based on the generated aerodynamic load.

On the other hand, several wind-structure interactions would be observed in our daily life. For example, the most popular Tacoma Bridge that collapsed in 1940 would be the benchmark of this event.

The finding has revealed that the structural damping of the bridge could not resist the vibrational load inducing the flowing air, hence resulted in the bridge collapse unfortunate event. 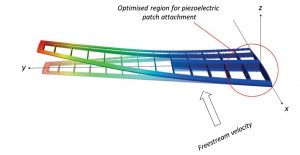 For the first time, they elaborated on fundamental issues concerning harvesting the energy via the structural vibration exerted by an aeroelastic condition, i.e., coupling between aerodynamic loads and structural elasticity.

Specifically, a high aspect ratio wing UAV class is called High-Altitude Long-Endurance (HALE). UAV primarily operates for 30 to 50 hours of flight between 50,000 ft and 70,000 ft of altitude. Recently, there has been some other research for solar-powered energy harvesting and control for this type of UAV.

Such aircraft may also be of advantage for surveying missions to lessen navigational hazards in extreme regions. Due to some reasons, a significant gain is an economic expense that corresponded to satellite systems and the most trivial ecological impact.

For example, the immense geographical latitudes that are of particular concern for the operation of solar-powered HALEs, as throughout the extreme summer, solar energy is enduringly available, which outmodes the demand of spanning the night hours with battery or fuel energy.

The first and only flight test attempt for UAV with the attachment of piezoelectric patch and solar panel for the energy harvesting was conducted by Anton & Inman as presented in their article entitled “Vibration energy harvesting for unmanned aerial vehicles” in 2008. It was through the modification of commercially available remote control (RC) aircraft.Still, the research on HALE UAV capacity of harvesting energy through the vibration during the wind interaction via the piezoelectric is not well developed.

The modified RC aircraft was flight tested, and both of the energy harvesting systems proven could be used to support the primary electrical power sources of the RC aircraft. Most importantly, they found that solar panels could supply 14 per cent capacity of a 170 mAh battery.

The piezoelectric elements could provide 70 per cent capacity of a 4.6mJ capacitor, such a remarkable division of green power generation via this approach. Since then, researches on the evaluation of piezoelectric energy harvesting potential from lifting structures, i.e., aircraft wing, have been increasing significantly.

On top of that, an investigation on the piezoaeroelastic energy harvesting concerning the augmentation on the aircraft performance was conducted by Akbar & Curiel-Sosa, researchers from The University of Sheffield, United Kingdom as described in their published article “Implementation of multiphase piezoelectric composites energy harvester on aircraft wingbox structure with fuel saving evaluation” in 2018.

Throughout the analysis, various multiphase piezoelectric-based composites were applied to a typical jet aircraft wingbox with a 14.5 m half span. An innovative approach to examine the trade-off connecting the aircraft weight, the fuel-saving and the energy harvester was developed in their research.

For instance, the results expressed that the equivalent fuel saved from the power produced by the wingbox is more than adequate for a 1 h Auxiliary Power Unit (APU) operation to be applied for the designed piezoelectric-wing planform.

Even though this research example is just one of the theoretical assumptions throughout a simulation programme, the proposed model would be a precious benchmark to generate the required amount of electrical energy and promote the green eco-friendly flight.

Moreover, gust loads on aircraft may induce harmful impacts such as increased aerodynamic and structural loads and lead to higher structural deformation and diminished productive flight performance. Conventionally, a plane is designed to
react with the gust loads at the desired airspeed.

The main reason for this idea is to allow the feasibility of confronting clear air turbulence (CAT) while in cruising flight, despite during turbulence solely. For instance, aerospace scientists have come out with several gust estimation profiles; vertical gust, lateral gust and head-on gust, where these gust load profiles will alter based on the conditions of flight; i.e. altitude density, altitude pressure, etc.

Toward this aspect, it is identified that once the energy has been transferred, the structure begins to oscillate and later induce structural vibration. The design engineer could authenticate a much robust structure via the prediction through simulation and numerical study to avoid the damage of the frame while maintaining the vibrational motion.

In that thought, a complex energy conversion system is embedded by associating an intelligent structure called piezoelectric inside the base structure, harvesting the energy to achieve the system’s robustness. 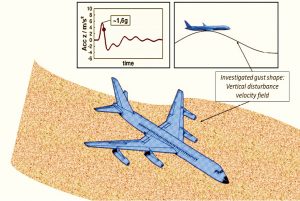 However, it may require a high cost of research on commercial aircraft in an aerospace application due to its larger size scale to test the piezoelectric capability to harvest the energy through the wind interaction.

On that composition, the ideas of having energy harvester have been widely investigated on the Unmanned Aerial Vehicles (UAVs) or commonly known as drone since last 10 years. In some means, piezoelectric vibration harvesters and photovoltaic solar labourers have included the aircraft’s design to harvest vibration and solar energy through the active method.

The knowledge of vibration via wind interaction and solar energy harvesting using innovative elements is recognised to increase the endurance of UAVs or even for any piloted aircraft without adding an amount of weight.

Most importantly, the crucial aspects in promoting our vision towards the green flight technological approach should be based on the 17 elements in Sustainable Development Goals (SDG) developed by the United Nations. — @green

The world approaches the perceived ‘tipping point’ for reducing GHG