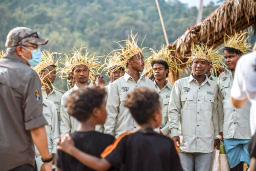 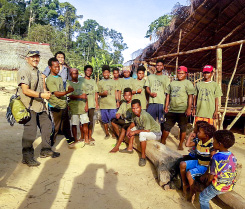 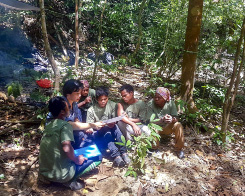 The wildlife conservation team focuses on the Royal Belum State Park in Perak, one of the most diversified wildlife hotspots globally. It is the last bastion of an untouched, pristine forest.

Menraq, or ‘our people’ in the Jahai language, is making big leaps to ensure the survival of the tiger species in Royal Belum while uplifting their community through wages earned from their hard work.

A brainchild of the Perak State Parks Corporation and non-governmental organisation Rimau, Menraq was set up in 2019 to save the Malayan Tiger.

Speaking to Twentytwo13, Perak State Parks Corporation director Shah Redza Hussein said there were 60 to 70 tigers in the Belum-Temenggor forest area seven years ago, but there are only 20 now.

The figures were obtained in a study by the World Wildlife Foundation (WWF) three years ago.

“Hunters from Vietnam, Cambodia and Laos come here using visitor visas and work as plantation and construction workers. But they are brought in by syndicates to poach for wildlife,” said Shah Redza.

“These poachers will set up big wire nests aimed at tigers. But other animals like bears, panthers or porcupines also become victims. These animals bring in money, but the poachers hit the jackpot when they get a tiger.”

Shah Redza’s priority upon being appointed Perak State Parks Director in 2018 was to ensure poaching was stopped in Royal Belum.

Although there were forest rangers, more had to be done to ensure the Malayan Tiger’s survival.

“Having lived in the forest all their lives, they (the Jahai) know the forest better than anyone else.

“The population of 20 will be halved within 24 months. It will then become unviable for the Malayan Tiger to reproduce in such a large landscape (117,500 ha) as their main food source, the samba deer, is also being poached.”

The State park worked with WWF and believed the Orang Asli should play a more prominent role in the conservation effort.

The challenge, however, was to ensure the natives understood conservation from a modern perspective.

Menraq was set up in 2019 with five members with initial funding of RM50,000 from Rimau.

“They had to show commitment during training, and they were also screened on their technical capabilities … if they could pick up essential reading, read maps, follow instructions and understand GPS (Global Positioning System).

“Those selected will go on to patrol the forest for 10 to 15 days in a month. They get RM85 a day, and on other days they can collect bamboo or catch fish to supplement their livelihood.”

Through the scheme, a contribution of RM10 is given to the village community chest daily for every Menraq member who goes on patrol.

“This year, we plan to expand the Menraq team to 21. This means their village can earn a minimum of RM2,000 a month.

“The buy-in from the village elders is very high. Their youth can earn a living, and there is also income for their village,” he said.

Shah Redza hailed the programme as a success.

Poaching in Royal Belum has been reduced by 90 per cent through joint efforts by Menraq, Royal Belum forest rangers and WWF.

“Four years ago, there were hundreds of snares and traps in Royal Belum. The team has helped destroy these snares to a point it has frustrated the poachers,” Shah Redza said.

“We are forcing them (the poachers) to reduce their activities. They may have even given up going into Royal Belum.”

However, they cannot recruit beyond 21 members as funding is paramount to the programme’s success.

“Rimau sources the funds. We cannot do so on our own as we are a government agency,” he said.

Rimau raises money through its initiatives, including donations from entities and individuals. — @Forest