Parkinson’s disease is a kind of neurodegenerative illness for which a straightforward diagnosis technique has not yet been devised.

Currently, several biomarkers that may be used to assess illnesses are under development. These biomarkers may identify the existence of a disease and track its progression and treatment efficacy.

The high price of these biomarkers and their lack of specificity are obstacles. Dogs participating in ground-breaking pilot research have identified Parkinson’s disease on sample clothes with up to a 90 per cent success rate.

Sniffer dogs are being taught to see whether they can detect Parkinson’s disease by their sense of smell, using the same methods used to identify illicit narcotics, explosives, and cancer through their odours. Researchers have recently concluded a pilot study in which they taught six canines to identify the distinct odour of a Parkinson’s patient’s clothing with a “primary reinforcer” – a nice slice of turkey. 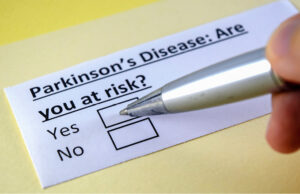 People with Parkinson’s might benefit from canine Parkinson’s detection in two ways. First, the dogs may aid in early diagnosis, potentially even before the onset of symptoms, which can result in patients obtaining essential treatment sooner. Identifying Parkinson’s disease by dogs might lead to a more precise knowledge of a biomarker that identifies the illness’s existence or early beginnings.

The team hopes that once taught, the dogs will be able to give important information on how, where, and when a biomarker might manifest. A greater knowledge of signs of a disease may lead to the development of more effective means of illness management, treatment, and even eradication.

Tests with sniffer dogs may be an efficient, non-invasive, rapid, and cost-effective way of identifying Parkinson’s disease (PD) patients in a community screening, health preventive, and neurology practice.

Scientists used the uncommon condition of a 72-year-old Scot to identify individuals with neurological disorders. Her extraordinary sense of smell aids in developing a new Parkinson’s disease diagnostic method.

After realising that Joy Milne could smell the illness, researchers spent years developing the test. The 72-year-old woman from Perth, Scotland, has an enhanced sense of smell due to a unique ailment.

She noted that her late husband, Les, had a peculiar odour when he was 33, which was 12 years before he was diagnosed with the condition that causes sections of the brain to deteriorate over time. Her finding grabbed the attention of experts, who proceeded to investigate what she could smell and if this might be used to identify others with the neurological disorder.

Years later, researchers at the University of Manchester developed a test that may detect Parkinson’s disease patients using a simple cotton swab rubbed over the back of the neck. Researchers may analyse the sample to discover chemicals associated with the condition, facilitating a diagnosis.

Scientists assumed that the odour was generated by a disease-induced chemical shift in sebum, a component of skin oil. In their exploratory research, they asked Milne to sniff T-shirts worn by Parkinson’s patients and healthy individuals.

She accurately recognised the T-shirts worn by Parkinson’s patients and said that one person in the group without the condition smelled like a Parkinson’s patient; eight months later, that person was diagnosed with Parkinson’s. Researchers believed the discovery would lead to developing a test to detect Parkinson’s.

They hypothesised that if they could identify a unique chemical signature in the skin associated with the condition, they would be able to diagnose it using simple skin swabs.

Using this knowledge, the scientists have now created a test. The experiments have been completed successfully in research laboratories, and experts are evaluating whether they can be used in hospitals.

If effective, the test might be used in the NHS, allowing general practitioners to send individuals for Parkinson’s examinations. The results, published in the Journal of the American Chemical Society, describe how sebum may be analysed using mass spectrometry – a technique that weighs molecules – to diagnose the condition.

Certain compounds are exclusive to Parkinson’s disease patients. Currently, over 18,000 individuals are waiting for a neurology consultation in Greater Manchester, and it will take up to two years to clear the list if no new patients are added.

Ten to 15 per cent are suspected of having Parkinson’s disease. They may then be sent to the appropriate expert based on the results of a smell test that would indicate whether or not they have Parkinson’s. Therefore, we are already discussing the ability to send patients to the appropriate specialists promptly, which will be revolutionary.

Is it feasible that in the future, we will be able to detect the odour of Parkinson’s patients at the supermarket or on the street? Is it ethically permissible to inform them that they have Parkinson’s disease?

Which general practitioner would accept a man or woman stating, “The lady/guy who smells Parkinson’s informed me I had it?” Perhaps in the future, but not now. – The Health

Telepharmacy is a value-added service

Addressing bullying from a clinical perspective