Understand how your brain responds to psychological threats such as the pressures and stress of modern life, work, and relationships

If you watched the 2022 Oscars, you would have been introduced to the concept of the amygdala hijack. The amygdala is a small part of the brain located in the limbic system.

Its function is similar to the “panic button” in a car park or the “break glass” emergency button in a building. When the brain identifies a stressful situation, be it physical or non-physical; real or perceived, the amygdala is activated and will send a signal to another part of the brain called the reptilian brain on how to respond to the threat.

When the amygdala is activated, it shuts down the rest of the brain. The reptilian brain will send an order to the body to fight, flee or freeze from the danger, whether real or perceived.

Every day, our amygdala is activated several times. For example, when driving and another car cuts in, there may be a moment of anger – that is the amygdala being activated. Or, if you get an email that annoys you and you respond immediately and later regret how you responded, that is another example of the amygdala hijacking the rest of the brain and informing the reptilian brain to respond.

The infamous altercation between Chris Rock and Will Smith at the 2022 Oscars earlier this year is a perfect example of the amygdala hijack and the response of the reptilian brain. The reptilian brain is located at the back of our head, as indicated in the image. This is what happened at the Oscars. 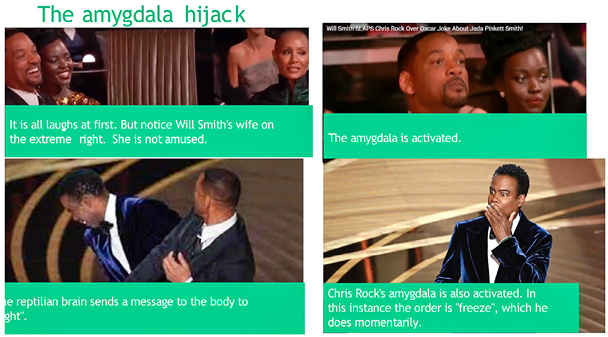 You can see when Rock first cracks the joke about Smith’s wife, Smith laughs but his wife is not amused. At some point, Smith must have been made aware that his wife was upset.

It is at this point the amygdala has taken over control of Smith’s brain. You can see the anger on Smith’s face. The message sent by the reptilian brain is to fight. Hence Smith walks on stage and delivers the slap to Rock.

What does Rock do? His amygdala has also hijacked the rest of the brain for a moment. The signal sent by his reptilian brain is to freeze. But being the experienced presenter that Rock is, he overcomes the reptilian brain and cracks another joke.

The amygdala is an important stress and danger monitoring system. It works with the reptilian brain to be our first-order defence system. However, we should also learn how to override the reptilian brain because it cannot differentiate between real and perceived danger.

Imagine an office setting where a staff member is upset with something and storms into the room of another colleague and starts shouting. The amygdala of the other colleague will shut down all the other parts of the brain.

The reptilian brain will issue an order to the rest of the body on how to respond – and it will be one of three – fight, flee or freeze. But it may not necessarily be the right response.

Deciding how to respond

The technique I use is to have a trigger phrase when I want to wrest control of the reptilian brain. The phrase I use is “activate filter”.

I say this to myself when I feel the amygdala has shut down the other parts of the brain. When I say the phrase “activate filer”, the circuitry between the amygdala and reptilian is broken.

At that time, I had no knowledge of how the brain worked and simply fled. Some years later, I was attacked by two burly guys just outside my home when taking an evening walk.

I was attacked on a hill. There was no scenario where I could have escaped from my attackers who were on a motorbike. The amygdala sensed this and, in a millisecond, communicated with the reptilian brain and the order was “fight”. It was the right response.

The amygdala is activated also when we are anxious about something. Perhaps you are about to give a major presentation or have an important discussion about performance. These are examples of when the amygdala may shut down the other parts of your brain.

You need to have a method to overcome the amygdala hijack. The amygdala is also activated when in conflict at work or at home – with colleagues or with family. If we know how to recognise when the amygdala has been activated in a person, we can manage the situation more effectively. – The Health

Tony Pereira is an Independent Consultant and Founder of SuperTrouper365

Recognising which option to take

If a person is in flee mode, his or her voice will quiver. It is an indication that the person really does not want to be there at that point in time.

There will be involuntary body movement. For example, the individual will not be able to look the other person in the eye; might start sweating; eyes will flicker faster than normal; might even cover his/her face without realising it. These are all signs that the person is in flee mode.

If the person is in fight mode, the tone of the voice will increase; the person will glare at the other and might even move towards the other in a threatening though not violent way. This is probably the easiest mode to recognise.

Finally, in the freeze mode, the individual may start getting emotional; the breathing will get shallow or heavy; the person may not even be able to respond to simple questions.

If you are a leader in your organisation, you need to know how your team responds when under stress. Learn about your team. Observing them is a good way to understand how they respond.

But also write down how you respond whenever the amygdala is hijacked. Keep a journal. That is how you learn to override the amygdala.