During Ramadan, it is essential for Muslim patients or those on medication who choose to fast to make sure they are capable of fasting.

As the fourth pillar of Islam, fasting during Ramadan is obligatory for every Muslim. However, some exceptions are granted to some groups of people, such as sick and menstruating women.

While Muslims must try their best to fast during Ramadan, taking care of their health remains the top priority. Having proper planning and consulting healthcare professionals will help Muslim patients decide what is best for their health.

Such consultations will also help clear any confusion on the medications and treatment that might invalidate their fast. It will also provide them with guidelines on medication intake during Ramadan.

“As Islam is the way of life, the decision made can be different. It will be based on someone’s health condition, situation and needs,” he said, adding that Muslim patients must refer to healthcare professionals to know more about the different suggestions.

There is often some confusion regarding the validation and invalidation of fasting when consuming medicines during the day during Ramadan. It is crucial to note that not all medication and treatment will void someone’s fast.

Generally, Ahmad Dahlan said, consciously putting anything into the nose or oral cavity until it reaches the stomach would invalidate someone’s fast, given that the person is fully aware that he is fasting.

“So, any form of oral medication and supplements such as pills and syrup are not allowed during fasting. The person in need of the medication can adjust the time to take them, either before suhur (pre-dawn meals) or after iftar (breaking of fast), during Ramadan as Muslims are allowed to consume foods and drinks from iftar until sahur the next day.”

It is permissible for patients to break their fast if they are required to take medicine for a critical need or to overcome unbearable pain. This also applies to patients who need medications such as antibiotics, which treatment requires an intake of four times a day or antivirus that needs to be taken five times a day to break their fast. The patients can replace their fast later.

In his research entitled “Guidelines on taking medicines for outpatients in the month of Ramadan”, Ahmad Dahlan came up with a set of guidelines during fasting. 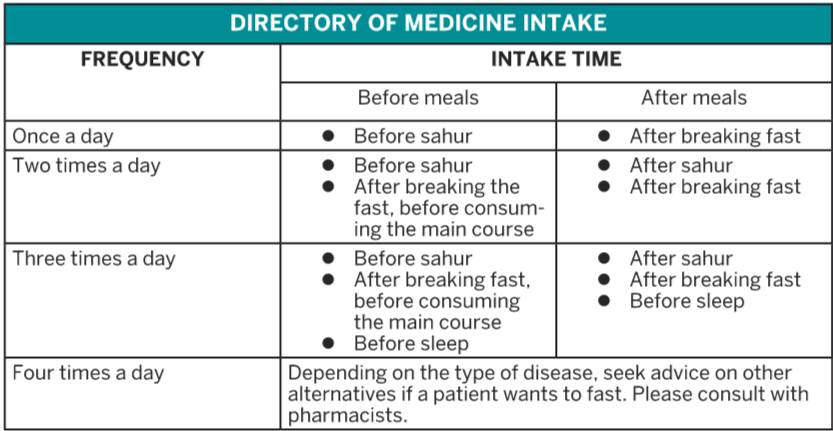 The guidelines serve as a general reference to patients and healthcare professionals for medicines usually consumed during the daytime, which may invalidate one’s fast. The medications to be consumed at night are to be taken as usual following the instructions provided.

Not all medications invalidate fast

“Injections that give us energy like drips, water, or total parenteral nutrition will invalidate someone’s fast. So, it is permissible for patients receiving all these fluids to break their fast and replace the missed fasts later.”

“Vitamin C injection for beauty purposes was not allowed during fasting as it was not critical and should be done after iftar.”

“In a condition to save someone’s life like severe asthma or heart failure, it is permissible to take a sublingual pill and inhaler without affecting their fast as long as they do not swallow them until they reach the stomach. There will be no issue with cream as it is for external use only.”

The critical role of pharmacists

Touching on the role of pharmacists during Ramadan, Ahmad Dahlan said the pharmacists should counsel and inform Muslim patients on how to manage their medication. However, he emphasised that such counselling should be done before the month of Ramadan.

“So, the best thing to do during Ramadan is to respect their practice by recommending the doctors to prescribe medicines which allow the patients to perform fasting.

“For example, if the doctor has prescribed the patient antibiotics four times a day, perhaps we can suggest another type of antibiotic that is twice a day or three times a day.

“Unless it is the only antibiotic to take and there are no other options, it is permissible for the patient to not fast and replace it later.”

Ahmad Dahlan said it was essential for patients with chronic or acute diseases to consult general practitioners or pharmacists to be informed more on their health in preparation for Ramadan.

These healthcare professionals could help explain the risks and benefits if these patients decide to fast. Adjustments of medications and treatment can then be made accordingly. — The Health