By YAMONA SEGAR
In the days leading up to the pivotal Climate Summit COP 26, Malaysia’s Prime Minister Datuk Seri Ismail Sabri Yaakob reiterated the country’s commitment to reduce greenhouse gas intensity per unit of gross domestic product (GDP) by 45 per cent by 2030 relative to 2005.

The Prime Minister added the commitment was unconditional and 10 per cent higher than the earlier target.

According to the graph on the left, the emission intensity of Malaysia has declined by 32 per cent from 2005 (base year) to 2018. It means the carbon emission per unit of income has declined over the past decade.

Sounds great, right? Except it’s not.

When examined more closely, the country’s overall carbon emission had increased by 31 per cent in 2018 from the 2005 base year. Because we measured our emission using an intensity target, which is normalised to account for economic growth, it appeared as though the emissions had decreased. 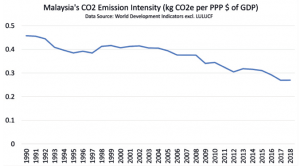 The bottom line is that Malaysia is contributing more to climate change than in 2005. Even if we achieve our “ambitious” target of reducing emissions intensity by 45 per cent by 2030, our absolute carbon emissions will nearly double.

The historical data (from 2005) and the projected data (up until 2030 as per the 12th Malaysia Plan) are shown, including compliance to Malaysia’s current 45 per cent GHG emissions reduction target per GDP.

Two remarkable conclusions can be drawn from the graph:

In other words, in addressing the climate crisis, Malaysia’s “commitment” is effectively to do nothing other than follow a business-as-usual scenario.

What matters most is absolute emission reduction

But here’s the catch. Even if all countries fulfill their nationally determined commitments (NDC) to reduce greenhouse gas emissions, these climate commitments are not on track to meet the Paris Agreement.

Even though most countries have increased their greenhouse gas emissions commitments, the recent NDC Synthesis Report concludes that more ambitious climate actions are needed.

Currently, even if all the voluntary NDCs are achieved, the global greenhouse gas emissions would only reduce by one per cent in 2030 compared to 2010.

This is in stark contrast with the 45 per cent reduction target recommended by the Intergovernmental Panel on Climate Change (IPCC), to stay within the 1.5°C global warming limit in the Paris Agreement. 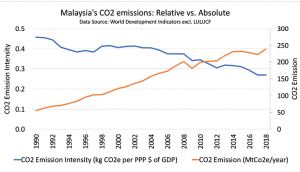 There is only one way to adhere to the Paris Agreement. We need to immediately transition away from fossil fuels much faster and more aggressively than we currently do.

This forces us to stop combusting fossil fuels entirely and leave them in the ground, right where the dinosaurs left them.

Notice one thing at this point: GDP does not feature in any way when it comes to curtailing emissions and mitigating climate change. Tying emission reductions to GDP is a misleading distraction.

The message is clear. Our emissions are rising. And the only way to cut down our emissions is to phase out fossil fuels.

Keeping our global temperature below 1.5 degrees Celsius hinges on a singular, unwavering focus from all governments, businesses, investors, and citizens.

Hopefully, Malaysia too will take its role seriously and play its part in combating the severe effects of climate change. — @green 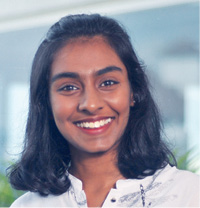 Yamona Segar is from IEN Consultants Sdn Bhd – a pioneering green building consultancy in Malaysia with a specialisation in energy-efficient and healthy buildings.

From linearity to circularity

Towards a better world