Next frontier of prostate cancer care

WHEN YOU hear the words “BRCA mutations,” you probably think of breast or ovarian cancer. But these gene variants can affect people with other types of cancer, too. And they play a very serious role in prostate cancer.

It’s something Mary Guckert, RN, MSN, Vice President and Development Leader, Prostate Cancer, at the Janssen Pharmaceutical Companies of Johnson & Johnson, understands well—on both a professional and personal level. Her research at the company is dedicated to working toward promising treatments for prostate cancer, a disease that has affected her family.

While the overall incidence of prostate cancer in the United States has gone down, the percentage of patients with very advanced, or metastatic, disease has gone up over the last decade, according to the Centers for Disease Control and Prevention. Between 2003 and 2017, the percentage of patients diagnosed with metastatic prostate cancer increased from four per cent to eight per cent

That’s especially troubling because metastatic prostate cancer is almost universally fatal: Fewer than one-third of patients survive five years after diagnosis. Roughly one in 12 harbors at least one gene mutation, such as BRCA1 or BRCA2. These gene variants dramatically increase the risk of developing prostate cancer, especially life-threatening prostate cancer.

As part of its 10-year legacy in prostate cancer innovation, the Janssen Pharmaceutical Companies of Johnson & Johnson has made it its mission to help these patients. The company is in the midst of clinical trials to potentially bring a new form of prostate cancer treatment to patients with this common gene mutation and a panel of other gene mutations, such as FANCA, PALB2, CHEK2, BRIP1, HDAC2 and ATM, which are actively being evaluated in clinical trials.

We sat down with Mary Guckert to learn about the company’s latest research, how it may prove to be promising for metastatic prostate cancer—and the ways her personal passion for working to help eliminate cancer is fueling this critical work.

First of all, what are BRCA mutations, and how do they play a role in prostate cancer?

BRCA1 and BRCA2 are genes that produce proteins that help repair damaged DNA. They are also sometimes called tumor suppressor genes, and when they have certain variants or mutations, cancer can develop. The genes can’t repair damaged cells the way they normally would, which allows abnormal cells to replicate unchecked.

If you inherit one of the BRCA mutations, you have increased risk of several different cancers, including, in some people, prostate cancer, and even if these mutations are not inherited, tumors can also harbor them..

A 2016 study published in the New England Journal of Medicine, for example, found that risk of metastatic prostate cancer was more common in patients with genetic mutations compared to noncarriers. 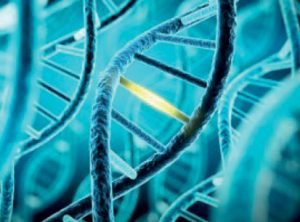 What is DNA Damage Repair Factor, and how can it help these patients?

DNA Damage Repair Factor is a type of targeted therapy that helps cells repair themselves from damage. One way to do that for some patients with prostate cancer with a specific mutation is through drugs known as poly (ADP-ribose) polymerase, or PARP, inhibitors.

PARP is a substance that plays a key role in the repair of DNA. When you block PARP as part of a cancer treatment, it may prevent cancer cells from repairing their damaged DNA, causing them to die. Studies show that PARP inhibitors can often be a very successful treatment for patients with advanced prostate cancer who also have a BRCA mutation in particular, since their cancer cells are especially sensitive to PARP inhibitors.

Our hope is that by having targeted treatments available early in the disease process for prostate cancer patients with these mutations, we can identify these patients at the time of their diagnosis and potentially significantly improve their outcomes.

But we may also be able to take treatment one step further. While PARP inhibitors that target cancer cells are highly effective, they aren’t enough to eradicate the cancer alone.

Prostate cancer is a very complicated disease with multiple growth drivers; the most notable and studied in recent years are androgens. Androgen hormones stimulate prostate cancer cells to grow. It appears that when androgen production is inhibited, DNA repair in cancerous cells slows down.

It makes sense to assume that targeting both pathways in cells may lead to more cancer-cell deaths than targeting either pathway alone. We are evaluating combination approaches that interrupt the androgen-making process as well as impact the tumor’s ability to repair DNA to make treatments even more effective.

We’re not advocating this combination approach for all patients with prostate cancer at this time but rather taking a personalised approach based on presence of mutation.

Why is there such an urgent need for treatments for this type of prostate cancer?

We know that patients with prostate cancer who have certain mutations face a worse prognosis, but unfortunately there are currently no PARP inhibitor combinations available to them until very late in the disease. We are evaluating the benefits and the risks of giving these combination treatments earlier in metastatic disease progression, before patients receive treatments like chemotherapy.

Current treatment guidelines in the US recommend that all patients with metastatic prostate cancer, and some with localised prostate cancer who have identified risk factors such as a family history of the disease, receive genetic testing.

For example, a survey published earlier this year in the Journal of the Canadian Urological Association found that only a little over a third of oncologists recommended that their patients with newly diagnosed metastatic prostate cancer go for genetic testing. And a recent analysis of more than 5,000 US patients with metastatic prostate cancer found that only 13 per cent had documented genetic testing.

Our hope is that by having targeted treatments available early in the disease process for prostate cancer patients with these mutations, we can identify these patients at the time of their diagnosis and potentially significantly improve their outcomes by providing more personalized treatments at the right time in their treatment journey.

What motivates you to study prostate cancer in particular?

I started my career as a nurse at a major academic hospital and have taken care of many patients who are battling a cancer diagnosis. Oncology nurses focus not just on administering treatments and managing side effects but holistically, on the entire patient experience.

I also have a personal perspective: My father was diagnosed with prostate cancer many years ago, when I was in college. We spent many years holding our breath waiting to receive his PSA blood test results, since a significant rise could mean his cancer had recurred. Fortunately, he is doing well.

Testing for the BRCA gene, in addition to other mutations potentially associated with familial cancers, is something I have undergone personally. In addition to my father, all three of my sisters have had cancer, and two of them have died. While none of us were found to have a genetic mutation of significance, like BRCA, it was important information to gather.

However, there are people out there with certain oncological mutations that we may be able to target with treatment in the future. That’s what motivates me to get up each morning and go to work: the belief that our work will allow thousands of people to continue to lead full, productive lives. — The Health

A tale of two pandemics