The efforts to reduce carbon footprints can be costly, but there is no price too high for protecting the world from climate change.

Planting trees is one of the inexpensive solutions to climate change as trees play an essential role in carbon sequestration. They help to reduce the amount of carbon dioxide in the atmosphere.

The session’s speaker was Dr Barathi Nambi, an agricultural scientist and the Founder Director of Growmore Biotech Tamil Nadu.

According to Barathi, a new clone, Beema bamboo, has increased the average yield of bamboo to a very high level, attracting industrial investment in the cultivation of the plant.

With the rapid growth rate and high yield of bamboo, the scientist is pioneering in establishing bamboo plantation as ‘Carbon Farm’ to offset carbon footprints.

He added that bamboo was one simple, cost-effective plant that simultaneously brings sustainability and produces other products.

Barathi revealed that one Beema bamboo could cool like a one-ton air conditioner continuously working for eight hours, absorb 6,000 litres of sewage water, clean 450kg of carbon dioxide and release 320kg of oxygen every year.

Barathi shared the average carbon produced by a person in Malaysia was 7.67 tonnes per year. In comparison to the Philippines, he said Malaysia’s carbon emissions had increased steadily since the 1960s.

“The graph keeps increasing. Can we flatten it, or can we bring it down?” 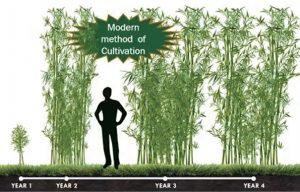 According to the scientist, to offset the CO2 emissions in Malaysia, each person needs to plant 19 Beema bamboos for the next five years. Barathi said bamboo was an excellent choice available to make the entire world carbon neutral.

He believed bamboo could help fighting global warming at a lower cost and more straightforward way.

He then wondered why such an effort had not occurred in Malaysia and pointed out that Malaysia only had 0.17 million Ha of bamboos.

He said: “You have oil palm and others. They also do carbon sequestration but not to this extent.”

Barathi said if bamboos were cultivated separately, they could produce 25 tonnes of biomass per hectare. However, by adding sciences into the picture through precision farming, they could make up to 100 tonnes per hectare.

He revealed people could produce not only furniture out of those bamboos but also electricity and ethanol. This precision farming includes proper drip irrigation, tissue culture, a proper clone of the species, and calamity condition.

Barathi then revealed, in comparison to the conventional way of cultivation, which usually takes up to four years for bamboos to harvest, the modern method of cultivation takes a shorter time.

Barathi then listed some aspects of bamboo that help with environmental sustainability, which are:

i) It produces an excellent amount of oxygen

iii) It can increase water table and use sewage water

“It is not only good for the environment, but it is also excellent for the farmers. It gives you more money, less labour, less perishability of the product, and no more replanting.

“Bamboo can generate oxygen, and today it is coming up as oxygen parks.

“One human being is equal to one bamboo because one bamboo produces 250kg of biomass wood per year,” shared Barathi.

“It can replace coal. Coal is a big commodity with Malaysia importing it.” 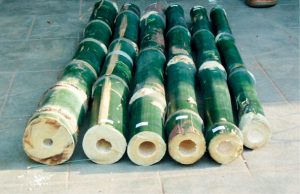 The scientist said 80 hectares of bamboo could produce one MW of electricity every hour for 365 days.

“Why? Because one kg of bamboo is sufficient to make 1KW current.

“It’s not carbon neutral technology like solar and wind, but it’s a carbon-negative technology. Every megawatt of current, every kilowatt of current produced, also produces charcoal which is good for the soil. And at the price of RM0.15, this is cheaper than solar,” shared Barathi.

He stated that 80 hectares of Beemba bamboo as an energy plantation could keep on supplying continuously without replanting through a process called pyrolysis. It would produce 8,000 MWh every year and also give a by-product called charcoal.

Barathi then revealed instead of taking the gas (converted from bamboo) up to the generator and converting it into electricity, the gas could also produce crude oil.

He said: “You don’t need to dig below the ground and take it from fossil fuel.”

He then shared Shell had developed and patented a technology called IH2 Technology, which converted bamboo via a hydro-pyrolysis process. Through this process, they could produce charcoal as well as gas.

“The gas goes through the reactor to convert it to gasoline, jet fuel, diesel or kerosene. Whatever you want, it can be produced.

“And whatever emission comes is converted into hydrogen through another hydrogen plant and is put back into the biomass. So, nothing is emitted.

“Not only petrol or diesel, but it can also make even ethanol which is used for blending today,” shared him.

He said bamboo was potential lignocellulosic biomass for bioethanol production because of its high cellulose and hemicelluloses contents.

According to Barathi, 65 per cent of the material available in bamboo was fermentable.

“Which means it can produce ethanol via a process that takes one week. You initially treat the bamboo, and then you convert the bamboo into starch, starch into sugar, sugar into ethanol.

Bamboo as an alternative to coal

He then explained that bamboo could be used directly to replace coal because coal has an energy value of 4,000 kcal/kg, similar to bamboo.

He then further clarified that this situation could be substituted with 30 million bamboos with an area of 300,000 hectares.

He revealed that the factory in India, Dalmia Bharat Cement, had started utilising bamboo instead of coal. The factory has one of the lowest carbon footprints produced in the cement industry. 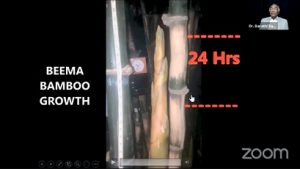 “You should have the best bamboo species, and the climatic condition as not all bamboo is going to do these 100 tons,” Barathi said.

He added that in achieving the biomass yield of 100 tonnes per hectare per year, the plantation needed the best bamboo species, best clone, best propagation tissue culture, best agronomy, high-density plantation and drip irrigation and fertigation.

He then showed the audience the growth of Beemba bamboo, which could be cut down and trimmed after less than three years and ready to grow back in two weeks. Bamboo is also suitable for all types of soil.

“Bamboo is the next disruptive technology to dominate the future,” said Barathi. — @Forest