Malaysia is one of the few mega biodiversity countries in the world. Due to Malaysia’s rich natural resources and diverse flora and fauna, the region has attracted many poachers and greed-driven individuals to carry out illegal activities in its forests, including its national parks.

The Department of Wildlife and National Parks of Peninsular Malaysia (PERHILITAN or DWNP), a governmental organisation responsible for protecting, managing, and preserving wildlife and national parks, has come up with several measures to address this issue.

Rotary Club of Melawati, in a webinar titled ‘Taman Negara biodiversity conservation and sustainability’, invited Dzumie Heriman Mohd Nor, the Deputy-Superintendent of Taman Negara National Park, to share his experience in managing, planning and monitoring conservation efforts in the area. 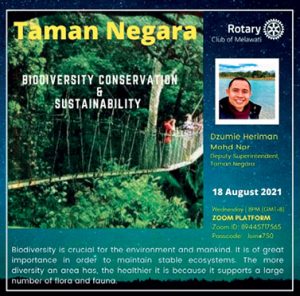 Dzumie began by telling the participants about the history of the Taman Negara National Park.

“It’s quite interesting because the early foundation of this place was set for the game reserve. That means the British officials will come here and hunt the wild animals, usually the big mammals such as elephants, Malayan gaurs and Sumatran rhinoceros,” said the deputy superintendent.

However, he shared that the decrease of forest cover areas due to the demand for rubber in the 1930s had urged the establishment of King George V National Park in 1939, which was then renamed into Taman Negara National Park after Malaya gained independence.

“Later in 1984, Taman Negara National Park was declared as Asean Heritage Park, and in 2014, it was listed under ‘Tentative List’ of UNESCO World Heritage.”

Enforcement as the top priority

“It defeats the purpose of conservation if there’s no enforcement,” said Dzumie.

He said enforcement is essential to maintain the integrity of the national park from illegal activities such as poaching, forest encroachment, illegal hunting and logging. He revealed that the legislation involved in this enforcement was the Wildlife Conservation Act 2010 (Act 716) and the Pahang National Parks Enactment 1939 (Enactment 2).

“The strategy that we do is conducting regular and random patrols to increase the effectiveness of the patrols. We also concentrate the patrols in identified hotspot areas. We make sure the boundaries are properly marked to differentiate the area between the land inside and outside of the national park.”

“We have 118 staff members to oversee the whole national park, which is six times the size of Singapore.”

Protecting agarwood trees and other species

He then included some pictures of poachers who were arrested by the patrols in his presentation. They were arrested and charged with legal action, and the database of these arrests was then shared with the immigration to deny their future entry into the country.

“Most of them are from Vietnam, Cambodia, Thailand and Myanmar. The ones from Myanmar even wore army-like uniforms. Through our investi

Dzumie shared the primary purpose of these poachers coming into the Taman Negara National Park was to look for agarwood trees.gation, some of them even have military backgrounds.”

He said: “Unprocessed agarwood will cost about RM30,000 per kilogramme.”

The agarwood trees in the national park would be cut down and left to decompose for several months, and these poachers would come back to take the high-value resin embedded heartwood.

He revealed the poachers would go into the jungle and stay there for three months. During the stay, they would bring along their equipment to catch wild animals.

“They’re bringing snares and traps to catch wild animals for their consumption. For extra income, they’re also targeting big mammals such as tigers, the Malayan gaur and Malayan sun bear,” said Dzumie, before showing the webinar participants the equipment used by the poachers to extract agarwood.

“Sometimes, they bring along firearms and fish bombs.”

He said the poachers usually came as tourists and extended their stay in the country.

In terms of biodiversity conservation, Dzumie shared that Taman Negara National Park had conducted in-situ monitoring and conservation programmes focusing on wildlife species and their habitats.

Additionally, they also collect information on wildlife and other related species for their database.

He stated that there were two units responsible for the conservation effort in the Taman Negara National Park, which are Wildlife Conservation Unit and Habitat Management & Enrichment Unit.

“In the Wildlife Conservation Unit, we are conducting the first National Tiger Survey (NTS) programme with the assistance of the Biodiversi

“Some of the works involve area survey, installation and withdrawal of camera traps. Through camera traps, we can get a lot of data regarding wildlife.

“Our primary purpose is for the tiger, but through the installation of these camera traps in our jungle, we can get data for other species as well, such as elephants etc.

“Through these camera traps, we can also study the behaviour of these animals, even the distribution of the animals in our jungle. My staff would usually go inside the jungle on foot and spend about 20 days there.

They’ll be installing these camera traps and doing all the other stuff there,” added Dzumie, pointing out camera traps also work to capture the images of poachers and tourists who get inside the jungle.

He shared that the Wildlife Conservation Unit is also involved in managing wildlife conflicts in the areas near the national park. These conflicts usually occur due to the movement of the animals into the nearby plantations and villages.

“What we’re going to do is we’re going to survey the area and work out the solution. If the problem continuously happens, we will try to translocate t

he animal to the area that will minimise the conflict between wildlife and human beings.”

As for the Habitat Management & Enrichment Unit, Dzumie stated that the unit is responsible for animal surveys in some places identified as the grazing grounds inside the national park.

He explained: “What we do is we maintain the grazing grounds, and sometimes we put artificial salt lick to increase the nutrients for these ungulates.”

Gunung Tahan as the main attraction for hikers

According to Dzumie, the Habitat Management & Enrichment Unit also manages the Mahseer Fish Sanctuary located at Lubok Tenor and monitors all activities within the sanctuary.

“We study the behaviour of fish, the breeding cycle etc. We also encourage the local community to be involved with the tourism activities in this area.

He shared the national park also had a Maintenance Unit that carried out maintenance works on the facilities in the area. The maintenance is to ensure facilities are in a satisfactory condition for the comfort of the tourists.

He revealed that these tourists come from 70 countries, with a consistently high number of international tourists coming from the Netherlands, followed by France, Germany, Spain, and the United Kingdom.

Regarding the tourism products, the national park offers its visitors various attractions and activities such as the Mahseer Fish Sanctuary, canopy walkway, wildlife observation, rapid shoot activity, jungle walk, hiking, camping, and visiting Orang Asli Batek settlement.The national park maintained its tourist arrivals of around 80,000 visitors per year, but the number had dropped significantly due to the pandemic.

“One of the attractions for the hikers is climbing Mount Tahan, the highest peak in Peninsular Malaysia. The journey takes seven days from Kuala Tahan to Sungai Relau. We limit it to 48 hikers per day to minimise the impact on our nature trails. It is compulsory to hire a mountain guide for safety reasons because this is a virgin jungle, and the danger could be everywhere.

“Each mountain guide is only allowed to bring 10 hikers,” shared Dzumie. — @Forest