In conjunction with their Global Climate Conference, Rotary International Malaysia held a series of weekly webinar leading to the day of the event. The session was jointly organised by the Rotarians, members of District Action Group on Environmental Sustainability (DAGES) Malaysia, Rotaractors and Interactors.

According to Datuk Bindi Rajasegaran, a Rotarian, the series was set to feature many imminent speakers who would talk on a myriad of topics. She stated the main objective of the series and conference was to create more awareness and have more youth involvement in environmental sustainability as they were the future game-changers.

In its first webinar session, the series featured Shah Redza Hussein, the General Manager of the Perak State Parks Corporation, to talk about Belum Forest and Tiger Conservation.

The session, which took about one and a half hours, gathered almost 200 participants from all around the world, including Cape Town, South Africa.

“The only way to access this park is by boats. All visitors need to get permits and go through our forest rangers,” shared Shah Redza, an economist turned conservationist.

The Royal Belum State Park is in Perak and is under the management of Perak State Park Corporation.

Shah said: “This forest is among the oldest and pristine tropical rainforests in the world. It is estimated to be over 130 million years, making it older than the Amazon and Congo Basin. It is a critical global area for biodiversity.”

Home to flora and fauna

Being the second-largest protected area in Peninsular Malaysia, this rainforest is home to many species of flora and fauna. Shah shared that at least 3,000 species of plants, 320 species of birds and 120 mammal species had been documented so far in the area. He also added that 12 out of 13 large mammals of Peninsular Malaysia were found in Royal Belum.

“From the species perspective, Belum Forest has four times more species of odd mammals than the whole Europe. 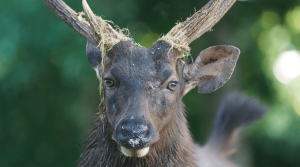 “Royal Belum is also the only place in Malaysia where three species of rafflesia which are Raffllesia azlani, Rafflesia kerrii and Rafflesia cantleyi grows at one site.”

He shared the park neighbours Bang Lang National Park and Hala Bala Wildlife Sanctuary, Thailand. The conservationist stated that together with these two protected areas, Royal Belum formed a contiguous forest which makes them the most extensive contiguous protected area in Southeast Asia.

He explained that contiguous forest is the same type of forest that is intact and not broken by anything.

“The contiguous forest is important because wildlife needs huge area for them to look for food, find shelter and to reproduce. For example, Tigers might need around 50 square kilometres. Elephants would need bigger range.”

The conservationist also shared that Royal Belum has the most significant raw water source for Perak and other States in Malaysia as a strategic ecosystem asset. It is the source of Sungai Perak and becomes a significant energy producer to generate 4 hydroelectric dams.

It is also a critical water catchment area and fresh water supply and an essential water source for irrigation and agricultural activities.

He said that the park is also a village to the indigenous community of Royal Belum, which has significant roles in protecting wildlife in the park.

He then showed a picture of the village. He explained: “It is just a charming scenic small village with around 20 families. There’s only one tribe there, the Jahais. They are highly skilled in hunting.”

Another interesting fact about this park is its critical habitat and range of the critically endangered Malayan Tiger.

“It has been estimated that the number of Malayan Tigers is less than 200,” said Shah.

He claimed that it was the responsibility of Malaysia to protect this species from extinction.

“No one else can protect them because they are not found anywhere else except here. If we fail to protect the Malayan Tigers, it means Malaysia has failed to save this species.”

He then shared that the biggest threat to these endangered species were poachers who mostly came from Indochina. Over the years, the number of tigers had decreased significantly due to wildlife poaching and wildlife trafficking.

He said that these syndicated poachers were highly skilled as they could stay in the forest for more than 3 months just to catch the wildlife there. In the last 10 years, these poachers had set up thousands of snares that would function as traps. The worst part of this was these snares did not discriminate against their victims.

“From sun bears to elephants, to samba deer, to leopards, whatever animals which step into the snares would be caught. But the tigers would be considered a jackpot. These snares would not only kill the tigers but also their food such as wild boars.”

Shah said that to protect the wildlife in Royal Belum, the State park had decided to strengthen its patrol team.

“There’s no other way except strengthening the patrolling. Unlike in Savanna, there’s still no proven technology that works in our thick humid rainforest.”

He shared that the State park had increased their rangers, and the rangers would go patrolling from 10 to 15 days by foot through designated terrains.

Jahai community as the local heroes

Shah highlighted that one of the critical success of their work in Royal Belum was the local community collaboration.

He shared that the State park had enlisted the local community from the indigenous village and formed MENRAQ. MENRAQ, which means ‘people’ in Jahai dialect, is a community-based wildlife patrol team set up by the State Park. It aims to let the Orang Asli take the conservation ownership and wildlife protection efforts in their own forest. 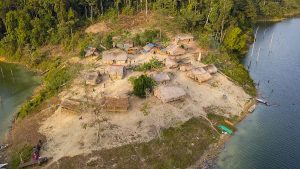 “The State park formed a programme where we will give allowances to the villagers who go patrolling. This means that every time they go patrolling, they also contribute to their village.

“This makes them more motivated. In short, we give them knowledge, training, values and empowerment. We also ask them to spread the conservation message to other villagers.”

He stated that the Orang Asli had their own local traditional knowledge, which was very useful in patrolling. He strongly emphasised that the State park took its responsibility towards the community very seriously. They had also started pre-schooling programmes for the children of the Jahai community.

“We bring the children into the forest to learn more about conservation, including how to set up camera traps and take pictures.”

The conservationist then expressed his hope for MENRAQ members to take community leadership roles in their village.

The importance of partnership

Shah emphasised the importance of partnership and said the efforts to the conservation were made possible because of partners like WWF and RIMAU, a local NGO that focuses on the preservation of Malayan tigers.

He stated that RIMAU plays a significant role in funding the activities, allowances and equipment required by MENRAQ.

Shah also highlighted that with the collaborative effort of the State park rangers, MENRAQ and WWF patrol team who were patrolling the area, the number of snares found in Royal Belum had decreased significantly.

“As a result, from hundreds and thousands of snares we had found over the past five years, we managed to bring down the number to only five snares in 2020. Out of the five snares, only two of them were active,” he said.

He also delivered some good news to the webinar participants regarding the sighting of a mother tiger and its three cubs in May 2020.