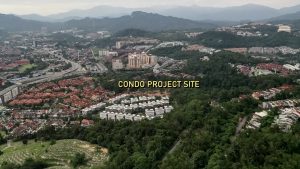 Will the guy in charge of environmental sustainability in my locality please raise his hand?

Since highlighting this issue in my last article, it seems nothing has changed regarding the continued assault on the remaining green lungs in Ampang.

Anyone passing along the MRR2 past the Petron Station before the junction of Jalan Wangsa 1, which is the only other access road up to Bukit Antarabangsa, can attest to it. And just a few metres after that, another massive green jungle has already been cleared for another project.

Obviously, this seemingly continued indifference both by the MPAJ and the Selangor government has raised the ire of the affected residents over safety and property values.

Instead of witnessing a Statewide enlightened environmental and community-friendly development with embedded sustainability, one sees the unmistakable footprints of overbearing developers in the light of the missing EIA, TIA and SIA reports.

Thus, the continued absence of these bedrock reports before approval throws the inevitable question of whether MPAJ is discharging its regulatory mandate.

It must be stressed the onus of availing these reports is on MPAJ. If these reports were indeed available, why are they not being shared with concerned residents despite repeated demands?

Consequently, the less than forthright sharing of these vital reports (if ever they existed) gives the unfortunate impression of discrepancies, anomalies and shortcomings in the administration, implementation and enforcement of policies by the authorities.

Of course, residents are clamouring for transparency to avoid innuendos or impressions of wrongdoings. Suffice it to s

ay, it is in the absolute interest of MPAJ to clear the air by sharing the said reports.

Recalling a Zone 5 residents meeting with the developers of Lot 850 in 2015, it was highlighted that a few years before, a massive landslide had occurred on Jalan Wangsa 1. It needed expensive repair work and realignment of the road. This also led to the designation of this whole hilly area as environmentally sensitive.

Given the area here is also home to various fauna and flora, including the endangered serows (mountain goat) species, a network of underground streams. The porous soil condition makes it very sensitive to soil movements from any construction or development work.

Interfering with the fragile environment

As mentioned in the previous article, during massive rainfalls, water will gush out of the slopes onto the main road of Jalan Wangsa 1, which may further threaten the stability of the area. Common sense and environmentally conscious experts will advise staying clear of interfering with the fragile environment.

Slope Watch, a renowned NGO and other community groups are keeping a close watch and constantly providing valuable inputs to the relevant authorities.

To date, the developers have not shown any EIA report, a critical condition for approval before a KM or Kebenaran Merancang certificate is issued. Neither is there a follow-up to the TIA (Traffic Impact Assessment) Report, after the Residents Committee rejected an earlier version for its lack of credibility.

Undoubtedly the TIA is critical as on weekdays, heavy traffic starts as early as 6am and lasts till 10 am.

A Social Impact Assessment (SIA) report, which analyses the impact of any development on residents’ social lives and mental conditions, is also long overdue.

At the rate things have been going in this country, this is possibly the last thing on the minds of developers, politicians and the approving officers in the authorities because, as non-residents, they lack empathy and are unable to feel the importance of this critical issue.

For example, a giant mall is a convenient place to shop for the community. Still, it also attracts people, including undesirable elements, from other localities. It can also negatively affect the business of the small retail outlets, restaurants and coffee shops that contribute to the community’s economy.

In the post-modern era of e-commerce and home shopping, malls are at risk of becoming a thing of the past. So, the million-ringgit question is, do Bukit Antarabangsa residents need another mall?

A temporary site and sales office structure has been built at the site of Lot 850. There is also a substantial wooden fence covered with graphics and pictures advertising the massive project.

Even clearing started, a giant tree uprooted and fell onto the MRR2 highway, damaging a parked car. Is this an omen of things to come? Who knows?

There are three to four reports on slope management for the entire Bukit Antarabangsa area, including dangerous slots, recommended remedial works and timelines for it to be carried out.

One reputable consultant also rightly predicted the landslip in Taman Kelab Ukay in 2020, which impacted about eight houses, was reported to cost RM4 million in remedial works.

According to the coordinator of a community Whatsapp group called “Zone 5 Deserves Better”, it seems the authorities will spend a few hundred thousand ringgit to conduct more studies, including slope hazard mapping, instead of following up or working on the existing reports.

These newly allocated funds would be better used to improve existing amenities and green activities, such as for community groups to plant more trees and do preventive work against further landslips disasters.

According to the “Ampang Jaya Deserves Better” Facebook, which has been highlighting issues in the area, the construction of the temporary 2-storey site and sales office did not meet the conditions of the KM or Permission to Plan as stipulated in Section 19 and 20 of the Urban and Country Planning Act.

In fact, in the application for KM by the company, this temporary structure was not included.

The Facebook page also claimed that searches at the Ministry of Housing and Local Government found that the relevant companies involved did not even have an Advertising Permit and Developers Licence (APDL).

Mind you, an APDL is the government’s effort to prevent housing development and sales fraud – something that has happened too many times in the past.

These and many other oversight issues are what the community groups and activists are trying to address. Yet, queries to MPAJ has not been clarified or not forthcoming at times.

Residents are duly concerned about the authorities adhering to the laws that govern development, especially in sensitive green and slope areas that can threaten the community’s safety and lives.

Issues being highlighted in this article is also faced by other cities like neighbouring Kuala Lumpur and other towns in the country. The way to move forward is to allow more democratic and transparent participation by communities either as individuals or via their resident committees.

Thanks to social media, the public is now increasingly aware of key issues affecting the environment, and young people are alarmed as they ponder their future living environment and the future of earth itself.

The Green Dude has witnessed the destruction of greenery in the name of development. He hopes common dudes like him can continue to highlight the irregularities and inconsistencies of implementation and enforcement by the authorities.