It is not easy to find a mineral water source on Langkawi Island, Kedah.

Just ask any businessmen who spent time and money finding a water source on the legendary island but failed.

But this did not deter entrepreneur Simon Wang from trying.After three years of trying to find a suitable water source, he was almost on the verge of giving up. But Wang, CEO of MC Gemilang (Natural Water) Sdn Bhd, persisted and finally hit paydirt in 2018.

Today, MC Gemilang is the sole mineral water producer in Langkawi. The well retrieves and pumps water from an aquifer.

Not bad for a businessman who before this had no interest at all in the water resources industry. In fact, Wang was known as “Iron Man” given that he was with a steel industry conglomerate and knew nothing about the mineral water business.

“I worked in the steel industry. I never Dreamt of starting my business in Langkawi. Water resources were something new to me,” he told The Health.

It all started for LWI Blue in December 2016 when Wang’s father told him there was an opportunity to do something in Langkawi.

“According to him, we probably needed a small investment.

“I was in my comfort zone, and it was a tough decision to leave my comfortable job. But we saw the opportunity. So, I thought, why not we give it a try.

“But it was not easy. Imagine having to find water Droplets from granite rocks without seeing them.

“With help from the USM team, using the ultrasound technology to detect, we discovered a source of water. But the capacity was not good enough.

“So, I almost gave up because, with the amount of money we had spent, we couldn’t continue further (finding water to start the business),” added Wang.

Leaving behind a legacy

One day, he went to a location accompanied by an Indonesian contractor (to help him operate the machine). The site was in the middle of Langkawi. It was a forest area called Gunung Raya.

Wang said finding the water source was not a walk in the park, but the Indonesian contractor continued to help Wang.

I asked him: “Why do you insist on helping me find the water?”

He told Wang it was not because of money.

“He said life was very fragile. If we find the water, we can leave something for the next generation.

“Sometimes fortune is not in the form of money, but it is in the form of blessing for good health (by consuming good water).When I heard that, I thought it was terrific.”

Determined, Wang acquired another piece of land which was located within walking distance from the previous site.

His determination and persistence paid off.

“A few months after we bought the land, we found the water source. So, we went to get permission from the Mineral and Geoscience Department Malaysia (JMG).

“When JMG pumped out the water non-stop for 72 hours, there were almost 800,000 litres of water. From this location, we could produce seven million litres of water per month,” said Wang.

So, in 2019 – three years after he started – Wang got the business going, and production began in September 2020. He also met EL Law, the Founder and CEO of biotech conglomerate Revongen Corporation. The two decided to team up to further grow the business.

Today, almost 90 per cent of MC Gemilang’s employees are from Kedah, with the rest coming from Kuala Lumpur and Penang. The company is targeting four production lines with a total monthly capacity of seven million litres of water.

On top of that, MC Gemilang is also targeting to develop two additional wells (making a total of three wells), which according to JMG, can be supported.

All its four production lines will be producing PET bottles, glass bottles and aluminium cans.

The most significant chunk will be taken up by the proposed construction of a RM15 million solar-powered six-storey tower that adopts an all-air ventilation system.

“From the beginning, we thought we will first cover Langkawi and later expand to the mainland.

“The pandemic slowed us down but have now identified many potential customers. I can see the future for water is very bright because water is a need.

“We will forge partnerships with certain brands. We will go for biodegradable technology,” said Wang. 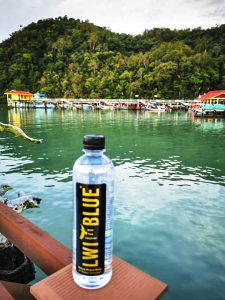 He said the MC Gemilang was looking for marketing partners and strategic partners.

“We are open to any product joint venture to see how we can utilise the water and bring it to the world. Let people benefit from Drinking good water,” he said, adding that LWI Blue was of a higher quality compared other local brands in Malaysia.

He said the company’s marketing strategy would not limit itself to Malaysia but was eyeing the overseas market.

Improving the water quality in other countries was of great concern to him.

Its target is to produce high-quality premier water at a reasonable price. It is also planning to make canned sparkling mineral water.

With each tourist consuming at least two litres of mineral water per day, that would prove lucrative for MC Gemilang. And this does not include consumption by the local population.

Wang pointed out there was also good potential to sell LWI Blue on the mainland as the quality was good and of international standard. — The Health