A resounding success – the Saudi International Halal Expo 2022 wrapped up its three-day event, from Nov 7 to 9, 2022, on a positive note, with the participation of companies and entrepreneurs from various countries who show their genuine interest in targeting the Saudi halal market.

The first edition of the expo served as an ideal platform for these companies as it connects halal professionals worldwide to network and share experiences. Not limited to just the Kingdom of Saudi Arabia, the expo opens up opportunities for businesses to explore the halal market in the MENA region, which is expected to grow at a CAGR of 5.8 per cent by the year 2025, with the involvement of countries like the United Arab Emirates and Egypt.

The event organiser, 1st Arabia Tradeshows & Conferences, expressed gratitude to those who made this year’s Saudi International Halal Expo a success. Following the overwhelming response to this first edition, the expo will return on Nov 19 to 21, 2023, at Riyadh International Convention and Exhibition Centre.

Considering the comments and suggestions made by exhibitors and visitors for its first edition, the second edition of the Saudi International Halal Expo & Summit 2023 will welcome people with bigger and better offerings.

Known for its unmatched quality of services, the event organiser is committed to meeting all elite international standards and providing the public and participants with a greater experience in 2023.

With more than 20 years of industry experience, 1st Arabia with its team of creative multinational professionals led by CEO & Managing Director Bilal Al Barmawi, will continue to promote the branding of the Saudi International Halal Expo worldwide, which supports the Kingdom of Saudi Arabia’s 2030 Vision.

It aims to highlight the Kingdom as the central hub for all halal industry businesses and create a vast network of new buyers and suppliers.

Muslims make up the majority of the population in Saudi Arabia. As this population grows, so will the demand for halal-certified goods. With this promising scenario, more and more players are exploring halal opportunities in the kingdom. It was evident with prominent halal players’ participation during the Saudi International Halal Expo 2022 at Riyadh International Convention & Exhibition Centre. 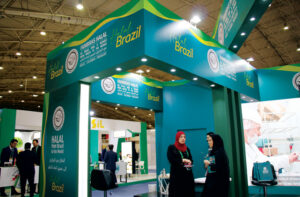 Gracing the largest pavilion at Saudi International Halal Expo 2022, was FAMBRAS Halal, a company with more than 40 years of history, acting as a halal certification body for products in Latin America. It is the largest certifier of halal products and services in Latin America and was a pioneer in implementing the halal system in Brazil.

According to Ali Hussein El Zoghbi, the Vice-President of FAMBRAS Halal, as of 2021, Brazil had exported two million tonnes of halal meat to the world, turning the country into the world’s biggest exporter of halal meat and poultry.

“We are very proud of working in this field. We have over 1500 employees working with us, making this dream come true. We are responsible for over 2 million employees directly or indirectly dealing with the halal process,” said Ali.

“Now, halal is not just about the halal food. Our company is also responsible for the social aspect where we help people who are in need. Halal is now much broader, spreading over the pharmaceuticals and medical aspects. We are proud to spread this Islamic concept to the whole world.”

Ali said they came to the expo to showcase their new system, Sys Halal – which will bring security and transparency and ensure final consumers see the whole process online.

Malaysia’s halal as the standard

Ali shared that FAMBRAS Halal had halal accreditations from everywhere, including Malaysia, Singapore and Indonesia.

“Malaysia, for us, is a reference. Malaysia has a very high halal standard, and they are the ones who taught us about it. We are proud to establish our requirements according to the halal standards from Malaysia.”

FAMBRAS Halal President Mohamed Hussein El Zoghbi noted that the halal market was increasing worldwide. The world now understands that products produced based on the halal concept are healthy.

“Halal is not just for Muslims; it is for the whole world,” he highlighted.

When asked about incorporating technology in the halal process, Mohamed opined that today’s technology improved the overall process. He also shared that he was proud of FAMBRAS Halal’s outstanding achievements in the halal industry, despite being based in a non-Muslim country.

“Since the beginning, we’ve been following international standards and requirements. We based our standards on Malaysian standards.”

Secretary-General of the World Muslim Communities Council (WMCC), Dr Mohamed Bechari, who visited the FAMBRAS Halal pavilion, said the Saudi International Halal Expo was one of the biggest halal expos. He asked the media to help spread the halal concept so it would be known worldwide.

Iljaz Idrizi, Regional Director of Pasta Diamond, shared that the company was founded in 1992 in Albania. It started with agricultural activities before establishing two wheat flour and pasta factories.

“We are producing top quality products with 14 per cent protein in three brands, Pasta Diamond, Pasta Vittale and Pasta Bella. We are exporting to different countries, including the Gulf countries such as Saudi Arabia, Dubai and others. We have also obtained the halal certificate for our products and are open for the global market.”

Ijlaz said the Saudi International Halal Expo was an excellent opportunity for the company to showcase their halal products. They have a good aim for these products to be marketed extensively in the Arabian countries.

“It is a great potential for our company since we produce more than 100 tonnes of pasta daily. So, it is a great opportunity, and we will work hard on this.”

The company also produces private labels and is open to worldwide collaborations.

The expo also witnessed participation from Vietnam and South Korea. Ramlan Osman, Director of the Vietnam Halal Centre, said there were over 100,000 SMEs in Vietnam but the ones accredited with halal certification were less than 500.

“The reason I am participating in this event is to promote some of these products from Vietnam, and hopefully, more companies from the Middle East can get the taste of them.”

Sohail Aslam, Halal Auditor of Korea Halal Authority, said the country participated in the expo to showcase its products in the Saudi market. South Korean halal products are famous in Malaysia and Indonesia, so their next goal is to enter Saudi Arabia’s halal market.

President of the Korea Halal Association, Chung Yi Ho, stated that the association wanted to promote the best products of South Korea in the Arab market. He shared that although halal was not a big market in South Korea due to being a non-Muslim country, their halal products are doing well in Muslim countries.

With the overwhelming response from industry players for its first edition, the Saudi International Halal Expo is set to return in November 2023.