Roadmap launched for Malaysia’s RE transition

To improve the nation’s renewable energy (RE) mix in electricity supply and fulfil its commitment towards climate action, the government launched the Malaysia Renewable Energy Roadmap (MyRER) – originally known as the Renewable Energy Transition Roadmap (RETR) 2021-2035 on Dec 30, 2021.

Minister of Energy and Natural Resources Datuk Seri Takiyuddin Hassan launched the MyRER to be implemented from 2021 to 2035 through government agencies and the private sector’s RE entrepreneurs and industry players.

MyRER is the Energy and Natural Resources Ministry’s (KeTSA) three-pronged approach, which will increase the capacity of the renewable energy mix in the country’s electricity supply and help the country meet its climate change commitments.

“This increase in RE capacity could help reduce the intensity of carbon emissions per GDP in the electricity supply sector by 45 per cent in 2030 and 60 per cent in 2035 compared to 2005 level.

“The increase of RE capacity target is the ministry’s commitment towards supporting the country’s aspiration to achieve carbon neutrality as early as 2050 as well as contributing to the country’s updated Nationally Determined Contribution (NDC) as submitted to the United Nations Framework Convention on Climate Change (UNFCCC) just before COP26 last year.”

The implementation of MyRER, he added, was also expected to generate economic spillovers from capital investments worth RM20 billion in 2025 and a further RM33 billion by 2035 and nearly 47,000 direct job opportunities in the field of RE.

MyRER, developed by the Sustainable Energy Development Authority (SEDA) Malaysia, has detailed the country’s short and medium-term RE development plan and the best path for the transition to a low carbon energy system.

It guides industry players on:

• the direction of national RE development by area in Peninsular Malaysia, Sabah and Sarawak;

• the potential, targets, strategic framework as well as the expected economic spillover value for the development of RE resources that contribute to the aspiration of increasing the RE mix in the country’s electricity supply; and

• reference for capacity projections and national strategies to achieve the target of 31 per cent installed RE capacity by 2025 and 40 per cent by 2035. 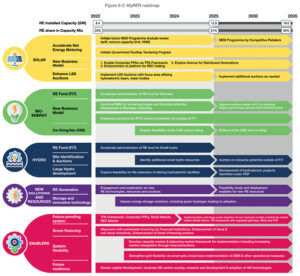 MyRER outlines a strategic framework to achieve the country’s RE development vision of “Towards a Low Carbon Energy System” through the implementation of four technology-specific pillars, namely:

And as each RE technology and resource has its characteristics, behaviours, and challenges, each technology must be developed separately to enable the best mechanism for the technology.

All these pillars will be further supported by four catalyst initiatives that act as enablers, namely;

b. Improve access to green financing – to increase financial flows vis-à-vis the government’s intent to accelerate RE deployment in energy transition;

The roadmap strategic pillars with a short-term milestone development target for 2025 will be achieved by enhancing existing programmes coupled with a few initiatives.

Meanwhile, the 2035 (medium-term) development milestones will be met by implementing new business models as part of the government’s strategy to future-proof its existing electricity market regulatory and power sector industry practices.

While the RE industry is delighted that the much-awaited MyRER has finally been launched, it is noted that the first milestone which has less than four years to go (i.e. 2025) will need smooth implementation of the required action plan as well as close monitoring to ensure any issues that arise can be addressed to the installed capacity of RE can be met.

The launch of the MyRER is indeed timely given that the urgency of climate change is on the rise. The release of the 6th Assessment Report by the Intergovernmental Panel on Climate Change (IPCC) last year revealed less than 10 years for global decarbonising actions to be implemented to achieve our Paris goal of limiting temperature increase to 1.5 °C.

Malaysia has the opportunity to be exemplary in this part of the world to chart a successful pathway towards a low carbon energy system and, to that effect, be a champion in balancing the energy trilemma.
— @Green