Islam advises that health maintenance is prioritised to carry out responsibilities in the best states of mind, spiritually and physically strong in carrying out the task set by Allah the Al-Mighty and cultivating the earth in goodness.

In the hadith from Abu Darda’ (Allah be pleased with him), the Prophet (peace and blessing upon him) said: “Indeed, Allah has sent down both illness and its cure, and He has appointed a cure for every illness, so treat yourselves medically, but use nothing unlawful”, the book of hadith by Abu Dawud.

In this hadith, there are two explicit messages, namely:

(i) If one is afflicted by illness, it is incumbent upon the person to find medicine to treat the diseases; and

(ii) it is incumbent on the person to find halal medicines to cure the diseases.

Concerning the hadith, there are five essential stakeholders equally responsible for advocating, researching, funding, support and prioritising the use of halal pharmaceuticals.

It is now established the halal status of a pharmaceutical product could confer advantages and added value that is not limited to Muslims only. There are three basic principles of halal concerning the use and production of medicine in the holy Quran, namely:

i) avoidance of foul matters;

ii) guarding against harm, and

As the product’s halal status must consider all these principles, the halal status should be in line with many current guidelines on good practices of industries and laboratories. For this reason, halal is often being considered equal to the state of cleanliness, high-quality product, ensured level of safety, and may even be extended to cover effectiveness.

It is a regulatory requirement for all pharmaceuticals to manufacturing them in a Good Manufacturing Practice (GMP)-certified factory. The principle of “avoidance of foul matters” is of utmost importance. It is implemented by having Standard Operating Procedures (SOPs) to test the incoming raw materials quality.

The quality testing includes investigations on the identity and purity of the active pharmaceutical ingredients (API) and the additives, presence of microorganisms and presence of heavy metals typically.

Suppose water is used to make pharmaceutical products. In that case, the water quality must conform to pharmaceutical grade water, which has very rigid specifications for several parameters, including the conductivity, Total Organic Carbon (TOC), pH and microbial limit.

Quality of air throughout the manufacturing process must also comply with Clean Room grade. All these are part of the “avoidance of foul matters” principle.

The second principle, i.e. “Guarding against harm”, is in principle part of the regulatory requirement mandating the toxicological study in animals and safety study in a human clinical trial to be conducted for any New Chemical Entity (NCE) or New Drug Abbreviation (NDA). Upon establishing a safety profile in human clinical trials, the NCE or NDA would be approved as a marketed drug or pharmaceuticals.

The third principle mentioned in the Holy Quran regarding medicine is related to the holistic purpose of treatment, i.e. “maintenance of health”. Ideally, treatment or the process to cure ailment should only be temporary. It should cover only the period of illness and be stopped once cured.

Prolonged or continuous use of drugs will incur effects that may be damaging. The westernised concept of medicine nowadays is heavily tuned on treating the symptoms instead of the underlying cause of the diseases.

One of the consequences of this concept is medicine for chronic use to maintain “symptoms under the radar” rather than to cure the disease.

In discussing halal pharmaceuticals, three aspects should not be neglected. They are:

It is in effect similar to halal dietary law. The halal evaluation of pharmaceuticals focuses on five halal-related ingredients issues – prohibited animal parts or derivatives, the prohibition of blood, the rule on the slaughtering of permitted animals, the ban of carrion, and the prohibition of intoxicants.

It refers to the manufacturing of pharmaceuticals. Halal pharmaceutical refers to any dosage forms including solid, semisolid, syrups and suspensions for any route of drug administrations (parenteral, topical, transdermal and pulmonary delivery systems) of conventional or modified release preparations that are produced from halal raw materials.

The latter involves both the API and the excipients (additives). Halal critical points demand that one be mindful during pharmaceutical preparation, processing, handling, packaging, storage and distribution. Halal pharmaceuticals shall not be “prepared, processed or manufactured using equipment contaminated with najs (filth) according to Shari’ah”.

The halal pharmaceutical products shall also be physically separated from any other products decreed as non-halal and najs by Shari’ah. The pharmaceuticals shall be packaged using halal packaging materials to ensure the highest standard of medicines is delivered to the patients. During the processing, these materials shall not be cross-contaminated with tools or carriages that have been in contact previously with non-halal materials.

In a National Standard MS 2424: 2019 Halal Pharmaceutical – General Guideline, (the only world halal guideline to be based on when applying halal certification for pharmaceutical, initiated by the Department of Standards Malaysia), it is stated that the “Product” must be “safe for consumption, non-poisonous, non-intoxicating or non-hazardous to health according to prescribed dosage”.

Pharmaceuticals or medicine is an item that involves formulation using an active substance known as “poison’. This poison or drug is listed either as Scheduled or Non-scheduled Poisons and are governed by the Poison Act 1952 in Malaysia, indicating their high risk of causing harm.

To qualify as halal pharmaceuticals, “the Product” containing the poison must be registered first with the Drug Control Authority [National Pharmaceutical Regulatory Agency (NPRA)]. The latter is responsible for evaluating the safety and efficacy of the poison according to the prescribed dosage.

It is stated in the Drug Registration Guidance Document (DRGD) of the NPRA that the manufacturer of drug products shall declare the source of any ingredients derived from animal origins. It is applicable for the APIs, the excipients and the ingredients used to make the API. 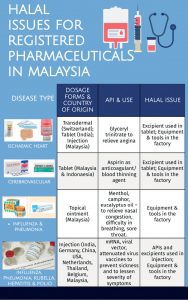 For example, in the case of gelatin, a commonly used excipient in pharmaceuticals as a stabiliser and capsule shell, the source of gelatin must be declared or stated on the product’s immediate label and outer label.

To illustrate the diverse aspects concerning halal issues in pharmaceuticals, here are some examples:

a. Gelatine in capsule shells in soft and hard gelatin capsules.

Gelatine is the primary ingredient to confer filming property to the thin capsule shells. There are three sources of gelatin, namely bovine, porcine and goat. For gelatin derived from bovine and goat, the animals must be slaughtered in the Islamic way to conform to halal regulation.

b. Gelatine in parenteral formulation.

Gelatine is a standard pharmaceutical stabiliser in the parenteral dosage form. The source of gelatin can be derived from bovine and porcine. Such parenteral formulations include vaccines, antibiotics, anti-inflammatory and anticoagulant drugs.

Some medicines to be consumed by oral (e.g. liquid or suspension) may contain alcohol (ethanol). There could be two functions of this ethanol in this medicine, either as co-solvent, antiseptic, or both.

Usually, ethanol is present in less than 11 per cent of cough syrup and high concentration (~20-30 per cent) in any tincture preparation. e-Fatwa JAKIM stated that ethanol could be used for medical purposes without saying the limit, as long as the ethanol origin is from the non-beverage, alcohol-making factory.

Nevertheless, there are always other medicines for the same indication that do not contain ethanol – for example, the over-the-counter (OTC) drug known as iKool®. The medication is in the form of an ointment and applied topically at the throat. It has been registered to relieve cough, and it is an excellent alternative to ethanol-containing syrups.

Ethanol in topical dosage form pharmaceuticals (lotion, cream, hand sanitiser) is used as antiseptic or penetration enhancers. e-Fatwa JAKIM stated that ethanol could be used for treatment. The requirement is that a non-beverage, alcohol-making company manufactures the alcohol.

Magnesium stearate is used as a lubricant in manufacturing solid dosage forms (tablets, capsules) and some inhaler preparation such as Dry Powder Inhalers of many brands and technologies. It can be derived from either plant or animal origin. Whenever it originates from an animal, the animal must be halal (livestock animal) and slaughtered in the Islamic way.

There are other halal issues related to registered pharmaceuticals in Malaysia, as illustrated in the infographic.

Everyone should know that ‘safeguarding life” is a part of Essential (Dharuriyyat) Maqasid Al-Shariah. It is also in line with the Sustainable Development Goal (SDG) No. 3 (Good Health & Well-Being) promulgated by UNESCO.

As a healer or healthcare givers, we are responsible for safeguarding the life of patients by providing medicines that can cure the diseases or alleviate symptoms. We shall as much as possible avoid giving medications that patients have to take on a chronic basis. When a medicine must be taken on a chronic basis, the prime attribute of treatment, “curing or alleviating”, is no longer applicable.

Ideally, one should also observe that justice is also being conferred while providing the treatment. Ideally, justice would be exercised if the medicament is curing rather than giving the medication on a chronic basis.

Regarding this issue, halal pharmaceuticals carry a more encompassing and holistic virtue of a pharmaceutical or medicine. It should have the element of “WISE” – wholesomeness, innovation, sustainability and synergistic, and equitable. It should be easily accessible despite geographical or economic limitations.

Halal pharmaceuticals should be “WISE” pharmaceuticals, the elements that will confer justice to oppressed patients, especially those who have to take the medicines, even though it could be certified as halal, but on a chronic basis and until death becomes the endpoint.

Halal pharmaceuticals in Malaysia are steadily progressing. To ensure the continuity and sustainability of this halal pharmaceutical industry, continuous and concerted efforts from all stakeholders are necessary.

Awareness and practice on halal pharmaceuticals shall be inculcated since primary schools with a more cohesive programme involving relevant stakeholders. The Ministry of Health (MoH) agencies such as the regulator (e.g. NPRA) and the
users (hospitals) shall continue to advocate and prioritise the use of halal and control the use of non-halal pharmaceuticals in any sector.

The new concept of halal, such as having the characteristic of “WISE” medicine, must be introduced, researched and promoted to provide a better healthcare approach to the world.