Malaysian pro wrestler Nor Diana shares her training routine, diet and what motivates her

One’s mental health is as important as our physical health. Athletes are no different.

Aside from keeping their physical fitness by undergoing training and diet, taking a break will help them improve their mental wellness.

“I would usually wind down after matches to recharge mentally and physically. Resting is equally as important as training,” said Malaysian pro wrestler Nor Diana.

Nor Diana, known as ‘Phoenix’, made global headlines when she became the champion of Malaysia Pro Wrestling (MyPW) Wrestlecon in July 2019 after defeating four male contenders. Since then, she has participated in many international championships and even had to turn down several invitations due to other commitments.

She started her journey in wrestling when she was 16 years old. Playing pro wrestling games on the PlayStation Portable (PSP) with her brothers when she was 14 had sparked her interest in the sport. The young pro wrestler is also known for her signature moves, diving crossbody and tilt-a-whirl cutter.

Nor Diana said it was important for a pro-wrestler to stay in shape to keep the momentum going. She was also put on a specific diet by her coach, Ayez-Shaukat Fonseka Farid.

The world’s first hijab-wearing pro wrestler then spoke to The Health about her diet, training routine, stress management and the local wrestling scene.

On consuming a healthy diet

It is no secret that the key to a successful diet is self-discipline. Nor Diana shared that her diet and meal plans were specifically tailored to her needs as a pro wrestler.

“I am put on a diet by my coach. I eat mostly healthy and must hit certain calories and macros.

“My meals are precise. I would need to weigh them and record them daily. I have a target of specific grams for carbs, protein and fats that I need to hit daily, and this involves meticulous planning and meal prepping,” said Nor Diana.

Other than maintaining a balanced diet, she said getting enough sleep was also important.

On exercise and training

Nor Diana shared that her exercise programme was also designed by her coach.

She said: “My exercise programme is tailored to be more explosive and put on muscle.”

“I go on hypertrophy and strength training, mostly using weights for resistance training,” she added. She also highlighted that it was important for a pro wrestler to always stay in shape, both physically and endurance wise.

Hypertrophy training is training done by people to put on muscles, specifically to increase muscle size or add muscle mass. Muscle growth typically occurs as a result of muscles overcoming external forces. This training is often associated with weightlifting.

When asked about her preparation before a match, she said: “I do lots of drills and endurance training. You need performance athlete level of stamina to safely do a wrestling match.”

Nor Diana also said that she would try to get training sessions with her coach whenever possible. However, during the lockdown, she would train on her own.

On stress and demotivation

It is only human to feel stressed and demotivated. Being under the spotlight and even listed in Forbes’ 30 Under 30 last year, the young wrestler has her own way of managing stress. 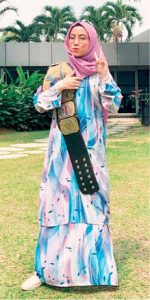 “When it comes to demotivation, I would often read old articles of me, watch more wrestling, envision myself being there and making it. I also look at old photos and successes, reminding myself why I started, how I’ve held on, and where I want to be.

“If life burns you, it shouldn’t kill you. Remember, you are a Phoenix. Rise from the ashes and higher than the last time (quoting her favourite line).

“Whatever people or life throw at me, I remind myself that I will not be swayed from my goals or be defeated. I always stay true to myself and my end goal. I focus on that and rise beyond everything that gets in my way.”

On the local wrestling scene

“Unfortunately, there is a lack of support by locals for local pro wrestling. They are too exposed to watching World Wrestling Entertainment (WWE).

Everything else or the minor leagues will always be compared to the WWE, and we will eventually be looked down upon,” laments Nor Diana.

“Give a chance and take a look at how we’ve grown. We’ve been receiving praises from veterans from across the world. It has the potential to be a big thing, but it all starts with local support.”

Being a hijab-wearing pro-wrestler, she said many criticisms were thrown at her. “At first, honestly, I was affected. But as time passed, things got old really fast, and I’ve learnt how to ignore them,” she said.

Her next goal is to make it to the big league like WWE. — The Health