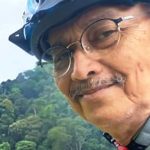 I have not consulted a doctor for years now, thank God for his blessings as I keep my fitness regime and balanced diet as religiously as I can.

I believe in nature and the benefits it provides from its plants and herbs. Man was born to consume nature’s abundance and the idea of consuming animals was due to the non-availability of edible vegetation in a community.

It is a disciplinary struggle to be a vegetarian and someone who has attained a higher consciousness of their body and mind can achieve that state – the Brahmins will attest to that.

We may have read about how cattle farming contributes to carbon emissions and yet we build more farms to feed the world. Really, it is about diets.

Cancer was discovered centuries ago but serious research into it only happened in the last century or so. It was thought that due to widespread consumption of food in cans during World War 2, cancer became a major problem after that. Hence the term cancer.

Now foods with preservatives have become a common thing and this is another major cause of cancer. Generally speaking, we blame it on our desire for convenience and fast-food consumption is no exception.

Developing and developed nations all succumb to this trend. Being a former ad man I too was a party to this fast food trend. I also promoted fizzy drinks which were essentially sugar laced with so called permitted colourings and artificial flavors. At least I now know better and am committed to unlearn and relearn new ways to maintain my health.

Convenience at the price of our health? But not to worry we believe we have the solution through drugs – from Panadols to aspirins to antibiotics – when these are all treating the symptoms not the cause.

And now its vaccinations. With more information comes more skepticism about the use of these drugs and vaccines. The enlightened ones work hard to practice alternative therapies.

The rise of non-communicable diseases (NCD) is due to the inability to understand health issues related to how our body functions. The dangers of consuming food that are chemically laced is not one that most people care about, let alone keeping fit.

We often dismiss the three main causes of death – heart attacks, stroke and diabetes as a hereditary problem. Nothing we can do – it runs in the family. Hello, have we ever thought that maybe it is because most of us in the family don’t run?

I met a specialist recently and he was so proud to say that he has two stems in his heart and consumed 17 pills a day to thin his blood for the last 15 years or so. His two younger siblings also have the same problem and they are both dead.

So, he has to deal with it till he dies. After all it runs in the family, he concludes.

When we bring up the issue of alternative medication, he immediately quickly dismisses it. I could sense it is a touchy issue. No discussions.

Well, my friend, sitting in the office, attending to patients and prescribing drugs for all their ailments seems to think that is the only way to cure diseases. After all he is the specialist. More like a drug pusher, I was thinking.

I left convinced that if this is how he and his kind see the problem, then the solution may also be flawed. Mind you I have seen many of my friends succumb to this approach. I am sure there are other more enlightened health practitioners who can give better alternatives and provide a more wholesome approach.

Have an open mind

Twenty years ago, I read a book by a prominent American doctor, Dr Ray Strand entitled “What your doctor doesn’t know about nutritional medicine can be killing you”. He had found himself in a losing battle, unable to successfully treat his ailing wife who had suffered chronically with pain and fatigue.

Dr Strand found that the body’s silent enemy is oxidative stress, and his research will equip you to protect and reclaim your nutritional health, possibly reversing disease and preventing illness. Chinese and Japanese health researchers and practitioners have long attributed poor blood circulation as the main cause of diseases and developed novel and scientifically proven therapies to cure the root cause, such as electron therapies.

China’s Traditional Chinese Medicine (TCM) has finally been recognised by the World Health Organisation (WHO) as an alternative to treat many illnesses. And why not – it has been around for thousands of years compared to western medicine which is only a few hundred years old.

Ayurvedic doctors are trained physicians but they prescribe natural Ayurvedic medicines to cure your problems. And yet, most modern doctors refuse to recognise them as they swear by the drugs they push, courtesy of big pharma.

We need to be more open minded and equip ourselves with health knowledge as prevention is better than cure, by sustaining our health, both in terms of our physical and mental wellbeing. — The Health

ADI SATRIA, a marketing communications veteran is unlearning many modern health regimes in favor of scientifically proven traditional therapies, now even using modern scientific applications to treat the cause. The use of drugs, and its inherent side effects to treat the symptoms may need a change of mindset and attitudes especially among western trained health practitioners who swear by the drugs they push.

Artificial Intelligence and robotics in healthcare