The Covid-19 (C19) pandemic has caused global havoc for more than 18 months, and Malaysia has not been spared. In fact, we appear to be on the receiving end of a more severe “new wave with a vengeance”.

The global “apocalypse” had strengthened calls for more urgent and enhanced measures to fight climate change. There were visible improvements to the environment seen when Mother Nature could ‘regenerate’ the environment during the lockdowns first stages of the C19 infections.

The pity about this phenomenon is that it has affected the poorer segment of the population far more severely than the better-off segment. Although the government has implemented numerous measures designed to alleviate their misery, the results were far from desired.

Action to fight climate change requires national policy decisions, implementation strategies, technical expertise, and, not least, adequate financial resources. These needs are far from a priority during the C19 pandemic.

Nevertheless, there are many things that human beings can do, at least on an initially smaller scale, and aim to ramp up the measures when the economic environment improves.

Is Malaysia doing enough in this global challenge? While Malaysia’s efforts may not be considered adequate, I believe we can reduce carbon emissions from an electricity generation and consumption perspective.

In this respect, the Suruhanjaya Tenaga’s latest edition “Report on Peninsular Malaysia Generation Development Plan 2020 (2020 – 2030)” of March 2021 gives some interesting and relevant perspectives, even though some aspects may warrant debate.

For a start, the report gives the power demand projections with two trends that incorporate the impact of electricity generation from renewable energy resources fed into the supply grid’s distribution network. 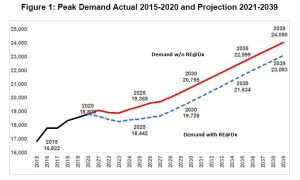 The planned generation development plant additions have been segregated to show the fossil fuel and RE powered system additions for the time horizon up to 2030, in attempts to conform with the government’s stated policy announcements on the desired share of RE generating capacity over the same period. 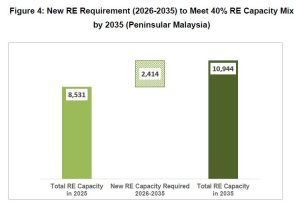 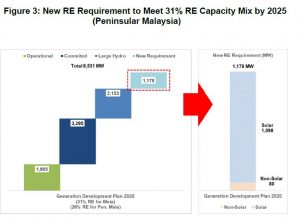 The RE capacity additions planned are predominantly from solar PV. This is not surprising as it is the most readily available RE resource for Peninsular Malaysia, where most of the large hydro potential has already been exploited.

The bulk of the solar PV capacity additions also appear to be through the LSS/USS (Large Scale Solar/ Utility-Scale Solar) projects promoted through the Suruhanjaya Tenaga’s (ST) annual tenders for connection to the utility transmission grid at 132 kV.

However, smaller capacity PV projects are still promoted through SEDA (Sustainable Energy Development Authority) for connection to the utility distribution network at up to 33 kV.

These include smaller capacity systems like rooftop installations at low voltage (LV), as well as larger rooftop and ground-mounted systems that feed into the distribution network, under a variety of schemes such NEM (Nett Energy Metering), Sefcon (for self-consumption), etc.

This mechanism includes installing rooftop PV systems for residential premises under the NEM scheme. However, the allotted capacity is limited to only 100 MW per annum. It appears that this scheme is not fully understood by the prospective residential consumers for various reasons, and particularly on whether such systems are economically or financially viable.

The pictures below show examples of residential premises rooftop PV installations in Malaysia (extracted from the MBIPV project slides). 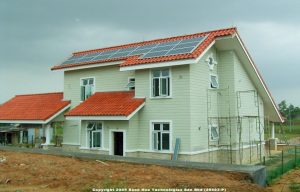 Recent conversations with friends, prospective investors in rooftop PV systems showed they were not best advised regarding the optimum proposed system capacity to install. As a result, they did not feel it worthwhile to invest in the PV system. The following comments are intended to dispel such misgivings.

TNB’s residential tariff block rates are as per the table below:

The cost of electricity produced from a rooftop PV system is calculated based on the assumptions below, based on a conservative yield of 100 kWh per month per kWp installed:

This shows that even for a PV system life of 10 years, the cost of electricity generation from the PV system is lower than the TNB tariff for consumption exceeding 300 kWh per month. The utility tariffs will almost certainly escalate over the life of the PV system installation, giving even more lucrative savings.

Therefore, it does not make sense to try to displace the supply from the utility grid for the first 300 kWh a month, which costs only RM77.00 a month. The table below shows the recommended optimum solar PV capacity to install for the best return on investment. 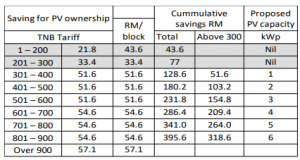 The above shows the investment (in terms of ownership cost) and returns (utility tariff savings) are shown in the table below. This indicates that even if the PV system ownership is for 10 years only, the savings in utility tariff payments exceed the cost of ownership.

Hence, there should be no concern for owners of residential premises who can install rooftop PV systems to worry about the economics of such investment. The maximum PV capacity that can be installed is constrained by the rooftop area available to accommodate the desired PV system and the limit on the maximum capacity permitted under the SEDA offer.