Early screening is an important way to help diagnose – and boost your odds of beating – many diseases. But when it comes to certain diseases like lung cancer, it can be especially crucial.

Lung cancer is the number one cause of cancer deaths in the world, in part because it’s usually diagnosed at a late stage. Almost 60 per cent of patients diagnosed with lung cancer today have metastatic disease, which means the cancer has already spread from where it started.

But while many companies working in lung cancer research today are focused only on treating late-stage disease, Johnson & Johnson is focused holistically on prevention, interception and treatment.

“Our goal is to prevent lung cancer from happening in the first place, and if we can’t do that, to intercept the disease in its early stages to slow down or prevent further development,” explains Zach Boyd, Head of Oncology Diagnostics at the Janssen Pharmaceutical Companies of Johnson & Johnson.

To accelerate work toward these goals, in 2018 Johnson & Johnson launched the Lung Cancer Initiative (LCI), a cross-sector R&D organisation that takes a multidisciplinary approach to maximise the full power of the company’s pharmaceutical, medical devices and consumer health groups, along with the expertise of outside collaborators and leading lung cancer experts in academia to develop innovations to prevent, intercept and treat.

For Lung Cancer Awareness Month in November, Johnson & Johnson took a look at some of the groundbreaking strides the company was making to help advance early detection and screening efforts as part of its overall strategy toward the ultimate goal of a world without lung cancer.

Bringing screening to where the patients are

Regular lung cancer screening, which involves a low-dose CT scan, is the most important step at-risk people can take toward detecting the disease early, when it is easier to treat and potentially cure. But for people to get help, they need to get access to screening.

And that’s a real challenge for many.

In September 2021, Johnson & Johnson collaborated with LUNGevity, a non-profit organisation focusing on lung cancer, and brought together industry colleagues to discuss the current state of access to lung cancer screening in the US. The consensus?

More work needs to be done, as only five per cent of patients eligible for lung cancer screening (which is covered by most insurers) under the current United States Preventive Services Task Force guidelines actually get screened.

For example, West Virginia has one of the highest rates of lung cancer in the US, with only 20 per cent of all cases diagnosed in the early stages, when survival rates are highest. There, only two to four per cent of the approximately 120,000 residents who are eligible undergo lung cancer screenings, in part because there are a very limited number of facilities across the state that provide the tests.

That’s why the LCI is collaborating with the West Virginia University (WVU) Cancer Institute and WVU Medicine on their launch of the mobile Lung Cancer Screening Unit System (LUCAS) last August. It’s the only fully mobile, artificial intelligence-enabled CT unit for low-dose lung cancer screening in the nation that doesn’t need an outside power source.

LUCAS, which can screen up to 20 people a day, is housed inside an 18-wheeler truck and is staffed by healthcare workers from WVU Cancer Institute.

You may know that a nasal swab can detect respiratory diseases, but would you guess that a swab could potentially help diagnose lung cancer? In fact, it’s a tool that a company called Veracyte is working on that one day may improve early detection of the disease.

“Oftentimes, it’s not clear if a nodule discovered on a patient’s X-ray or CT scan is worrisome or not,” explains Matthew Mailman, Head of Lung Cancer Early Detection at the LCI. “The only way to know for sure is to biopsy the nodule, and we aim to reduce additional procedures when possible.” 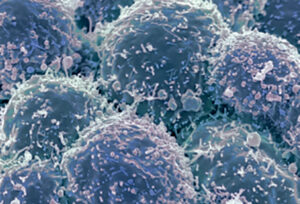 It may seem surprising that a nasal swab could give you information about lung cancer, but it actually makes sense, says Mailman. “While the nodule itself may be in your lung, the whole respiratory tract has been injured through smoking or other exposure,” he explains.

In 2019, the LCI announced a collaboration with Veracyte to develop a non-invasive nasal swab test, which uses genomic technology to detect smoking-related damage associated with lung cancer.

Last June, Veracyte and the LCI presented clinical validation data at the American Society of Clinical Oncology annual meeting that the test, known as the Percepta Nasal Swab, accurately classified lung cancer risk in current or former smokers with lung nodules. The test was able to identify patients that should be classified as low risk 97 per cent of the time and patients that should be classified as high risk about 70 per cent of the time.

“The swab could be an extremely important tool to identify individuals that are at low risk of cancer and may not need a biopsy, while also identifying patients whose nodules are more likely to be malignant to accelerate diagnostic and treatment decisions,” explains Mailman.

When it comes to diagnosing lung cancer at an early stage, there’s a piece of critical information that researchers need.

“What is missing is an understanding of the events that happen prior to the earliest stages of lung cancer development—the changes to lung cells before they develop into cancerous lesions,” explains Stewart Bates, Senior Director, Clinical and Translational Biomarker Leader, Lung Cancer Initiative, Johnson & Johnson.

“We want to be able to understand the process a cell goes through as it transforms from normal to precancer and what predicts whether it will then go on to develop into cancer.”

To help do this, the LCI, in collaboration with Boston University, is leading the development of a Lung Precancer Atlas (PCA) as part of the National Cancer Institute Human Tumor Atlas Network. A collaboration between world-leading lung cancer centers across the US and the UK, the PCA is characterising precancerous lung lesions from both banked samples as well as prospective collections.

Using state-of-the-art molecular profiling techniques, the PCA aims to decipher the mechanisms driving the progression of precancer to cancer.

“Over time, some lesions progress, and some remain stable or naturally regress,” explains Bates. “The hope is that we can use this information to identify the mechanisms that drive some lesions to progress to lung cancer and identify patients at a higher risk of developing the disease.”

In addition, once we understand these key processes, “we can potentially develop drugs and treatments to target these pathways and intervene at the earliest stage to stop these precancers from progressing to cancer,” Bates adds.

What kind of treatments might researchers look at? Early results have shown that lung precancerous lesions can be classified into different molecular subtypes, and that the most aggressive of these subtypes show loss of specific immune-cell populations compared to less aggressive lesions.

Getting the right treatment

The goal is to use the information coming out of these analyses to develop treatment strategies that target these aggressive lesions and prevent them from developing into lung cancer.

Beyond developing new treatments, an important area of focus for Johnson & Johnson is ensuring that patients get the right treatment for their particular type of lung cancer.

For example, a type of lung cancer known as non-small cell lung cancer (NSCLC) accounts for around 85 per cent of lung cancer cases. There are several types, and patients typically have a poor prognosis: For NSCLC with epidermal growth factor receptor (EGFR) mutations, the five-year survival rate is less than
20 per cent.

This past May, the US Food & Drug Administration (FDA) approved a Janssen medication for the treatment of a specific type of genetically defined NSCLC. At the same time, the FDA approved a companion diagnostic test, which is performed before the initiation of treatment to determine which patients might benefit most from a particular therapy.

This companion diagnostic, explains Boyd, is based on next-generation sequencing (NGS) technology, which means that it can generate information about the genomic sequence of the tumor present in a sample and help identify more effective therapeutic options for patients.

Traditionally, polymerase chain reaction-based tests have been used for this purpose, but they fail to identify 50 per cent or more of the mutations associated with this type of NSCLC. So, this new test will help ensure that patients are getting the most targeted care, upping their odds of survival.

And that is exactly at the heart of what Johnson & Johnson is aiming to do: work toward a world where fewer people die from lung cancer and eventually, a world where the disease is eliminated. — The Health

This article appeared on the Johnson & Johnson website recently.