Green building certification schemes like LEED (US) and Green Mark (Singapore) already reward the use of low carbon building materials. For such projects, only modest carbon reductions of about 10 per cent are typically achieved, mostly from replacing some of the construction materials with low-carbon alternatives. Interestingly, the building sector has a much larger carbon reduction potential once we look a bit into the future.

In Malaysia, there is an increased focus on reducing greenhouse gas emissions in the construction sector. Examples include the recent report by CIDB on embedded carbon for construction materials and the recent launch of the malaysiaGBC Carbon Score scheme.

Using the framework of the latter, this article found a whopping 85 per cent reduction potential of the carbon footprint of Malaysian buildings from implementing energy efficiency, implementing clean, renewable electricity, shifting to electric vehicles powered by renewable energy, and switching to using low-carbon wooden structural systems.

The carbon calculation is based on the energy efficient Suruhanjaya Tenaga Diamond office building in Putrajaya, one of the early green building landmark projects in Malaysia. While the operational carbon footprint calculations are based on actual measured energy consumption data, the environmental impact from the building materials was extracted from international material databases. Moreover, the daily commuting figures are based on the best available data.

In the following, each of the carbon footprint reduction potentials in the above graph will be expanded upon.

The operational energy of office buildings can be reduced to one-third of normal buildings. Case in point, the ST Diamond building has a measured building energy intensity (BEI) of 70 kWh/m2/year versus that of typical office buildings with a BEI of 210 kWh/m2/year. Moreover, about 10 per cent of the annual energy consumption is covered by the thin-film solar photovoltaic system on the roof. 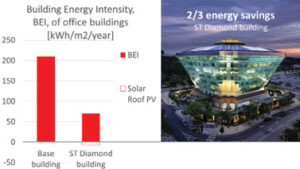 The energy consumption of the energy-efficient ST Diamond building shows a two-thirds reduction compared to typical office buildings in Malaysia.

The electricity from the grid will increasingly be powered by renewable energy in the future. In fact, the latest data from Europe shows that this shift is well on the way already.

Graph Two shows that Denmark has already seen a seven-fold decrease in carbon emissions from 1990 (700 gram CO2/kWh) to 2000 (105 gram CO2/kWh). Malaysia will likely see a similar trend in the coming years as solar photovoltaic power is about to reach grid parity and is projected to become cheaper and cheaper over the next decade.

Moreover, the Malaysian power utility Tenaga Nasional Berhad (TNB) has declared that they target to deliver zero-emission electricity by 2050 through a combination of renewable energy and carbon capture and utilisation (CCU).

It is already possible to use wood for the structural system of buildings. Several buildings 10-storeys or higher have already been built around the world, such as in Norway and Australia.

Replacing the reinforced concrete structural system of the ST Diamond building with cross-laminated timber would achieve a 70 per cent reduction in the embedded carbon of the building materials.

Currently, high rise structural wooden construction is not taking place in Malaysia for fear of termites, potential high humidity issues, and because it is not allowed by the fire code.

But there is good news on all fronts. Termite and humidity issues can be resolved, and word has it that the next update of the Malaysia Unified Building By-Laws will allow for structural wood, insofar performance fire testing is undertaken for approval by the fire authorities.

The 85 per cent carbon reduction from the building sector requires a multi-faceted approach. Let’s pursue it with an all-hands-on-deck approach, given the urgency of the climate crisis. — @Green

5G existence will facilitate the development of smart cities