Durioo Plus: Aspiring for global viewership

The digital world is vast and full of information. With just a few Google searches away, people can gain access to any kind of content they like. Whilst the Internet definitely makes life easier for most people, it has become a concern for parents as they need to make sure their kids consume the right content.

Omar & Hana, a local animation by Digital Durian, is one of the most preferred series by Muslim parents, especially in Malaysia. It is a good example of kids entertainment which carries Islamic values and lessons.

Omar & Hana is a cartoon series about two Muslim siblings who learn about Islamic values throughout their everyday’s lives. Their parents play a huge role in teaching and explaining to them these values and messages. The show includes many catchy songs and relatable storylines which appeal to the reality of Muslim lives.

According to TRT World, CEO and Co-Founder of Digital Durian Sinan Ismail said the series was initially launched in 2017 for the Malaysian market but the show creators always aimed for the series to go global. He said it took the team six months of research just to think about the names. As for Omar, the boy character, he has an obvious Muslim name. However, the creators decided to use Hana for the little girl character to give it a universal appeal.

Previously, Digital Durian was known with the popular kids animation series, Didi & Friends – but on Nov 18, 2021, Sinan informed through his Facebook account that Didi & Friends would be handled by his co-Founder’s company. He shared that at first, some parents suggested to the team to use Didi & Friends as a platform to teach kids about Islam.

“But the reality is that we can’t show chickens performing (daily) prayers. We needed real characters for that,” he said.

It was in 2017, after Fadilah Rahman joined Digital Durian as a producer, that the team finally entered the market of Islam-themed animation. Fadilah, who had experience promoting brands, said there’s a huge demand for Islamic animation but there wasn’t much available at that time. She said that whatever animation was available in Malaysia and neighboring Indonesia was focused more on decimating Islamic teaching than catching the attention of the children.

She was then quoted by TRT World, saying: “If the kids are not interested in watching your characters then it doesn’t matter what instruction you put in the show. A content that can catch a kid’s attention was something that was really lacking.”

Omar & Hana has three billion views on Youtube and more than six million subscribers. The show is made available in multiple languages including English, Arabic, Urdu and Malay and aired in 25 countries all around the world – the UK, Middle East and North Africa (MENA) region, Malaysia and Indonesia.

“Our mission is simple, we want to create value and make millions of children and families around the world happy with our content, products and experiences,” Sinan stated.

On Nov 26, 2021, Sinan announced the birth of Durioo – a new tech startup which was established to expand the team’s wish to produce quality Islamic animation for children all over the world. Durioo’s aspiration is to be The Disney and Netflix for Muslim children.

“Enough of the tears. After bidding goodbye to Didi & Friends, Sinan and the team introduce Durioo, Mina Mila and Little Ammar!,” he wrote on his Facebook post.

According to Sinan there were more than 400 million Muslim children in the world but there’s not much high quality Islamic animation and games which they could consume to learn the beauty of Islam.

“At Durioo, we believe animation and games with Islamic essence will bring many benefits. Just imagine the impact that we can bring to 400 million Muslim children,” said Sinan. 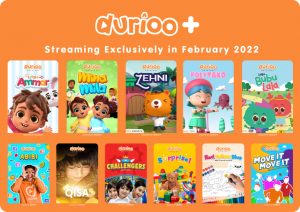 “Previously at Digital Durian, we’re an animation company which produces animation to be broadcasted on Youtube or sold to TV stations. At Durioo, our aim is different. It is a tech startup. We will have our own platform, Durioo+ and Durioo games. We will also produce Durioo Originals and mobile games.”

Durioo+ is a streaming service which can be accessed through smartphones, tabs, Smart TV, Android Box, etc. Sinan said the team will produce their own animations and contents with the brand Durioo Originals.

“We will collaborate with other animation companies (local and international). The most important thing is, Durioo+ will air high quality Islamic essence contents only. This is because children deserve the best.”

Durioo+ is set to meet the world in 2022. For starters, Durioo will come up with two original series namely Little Ammar and Mina Mila on its platform.

“Little Ammar is the Cocomelon for Muslim children,” he said, adding that there would be more series to come.

He also shared that Durioo will produce one game each month through Durioo Games – a platform for mobile games with Islamic values and lessons.

“We know this will not be an easy journey and will take a long time but we will do our best. Who knows one day Durioo will get the opportunity to create an animation with Mo Salah or Paul Pogba? Nothing is impossible.”