These days we never fail to be consumed by the stinking smell of corruption and irregularities conducted by our political and institutional leaders tasked to manage public property and the environment transparently and responsibly.

Within the Ampang Hulu Kelang area, we have witnessed massive development, which threatens the fragile ecosystem where the highlands are home to a critical water catchment area.

Specifically, the Bukit Antarabangsa area, which saw several landslides over the last two decades, has seen new property developments coming to a halt.

Most banks have also reduced approving loan applications to existing and new properties so much so that it has deterred property developers from embarking on new projects for fear of difficulty in achieving sales.

A case in point there is a cluster of 2-storey housing units along Jalan Bukit Antarabangsa that have not been sold since its completion a few years ago.

However, these setbacks are also considered blessings in disguise for the residents of Bukit Antarabangsa. They are assured that those who stay here will enjoy the peace and tranquillity of a low-density population and traffic besides the cool atmosphere of hilltop living.

Nonetheless, it is a different scenario during the morning and evening rush hours. They have to put up with traffic jams from the top of Jalan Bukit Antarabangsa residential areas and the five significant condominiums within the locality, right down to the only two exit roads towards the MRR2.

It will typically take between 30-50 minutes to exit, depending on the traffic condition along the MRR2. However, for the rest of the day the roads are virtually traffic-free.

However, in September, some residents noticed a small white notice board appearing in front of a green jungle area along Jalan Bukit Antarabangsa opposite the Riverdale Park Apartments.

This jungle area has long been left idle as it is part of the Riverdale Park Apartments property earmarked for constructing its clubhouse.

The notice was to announce the request by the developer of the Riverdale Park Apartments to amend the original KM (Kebenaran Merancang) or Planning Permission by applying to build new 28-40 storeys of apartment blocks consisting of 1,100 apartment units.

A protest letter was sent by the Joint Management Body of Riverdale Park Apartments to the Director of the Urban Planning Unit of the Ampang Jaya Municipal Council.

The letter states it was the failure of the property developers Zed Enterprise (M) Sdn Bhd to complete the construction of the apartment blocks that led to the plans to build the clubhouse and its recreational facilities being abandoned.

In fact, there were two apartment blocks that the buyers had to pay an extra RM20,000 each for the blocks to be completed.

The developer Zed Enterprise (M) Sdn Bhd has since been blacklisted as they have not obtained the strata titles for all the properties. 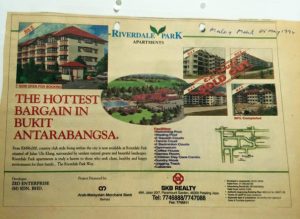 This scenario is not unique to Riverdale Park Apartments, as a few other properties within the area face the same problem due to the failure of the respective developers.

Since then, Zed Enterprise has changed ownership. The attempt to amend the Permission to Plan to add more units is undoubtedly strange for MPAJ to consider approving the application.

Besides not fulfilling the terms of the original sales and purchase agreement which states that it is a low-density property, the site is also not suitable for constructing high-rise buildings as it is in a river basin very close to a river.

Besides, MPAJ had gazetted it as a commercial and vacant land that allows the clubhouse to be built there.

The protest note also stated that Zed Enterprise has failed to complete a project in Lot 11758 in Bandar Ulu Kelang. How can they be expected to complete another massive project at the Riverdale Park Apartments with this bad track record?

Another critical point regarding the environmental risk is that it is only one kilometre from a massive landslide in 2008 that killed a few people and damaged 14 houses.

In another landslip less than a kilometre away last year caused the residents of eight houses were evacuated.

The residents wonder whether this is part of a new agreement between the developers and the Gombak land office to obtain the strata titles for the current 380 units.

No matter what, the residents feel that it is the responsibility of the land office and the MPAJ to ensure the safety of the residents, the environmental impact, and the traffic impact to the area.

The residents’ association and other active members of the community held an emergency meeting to protest this proposed development.

Some of the notable residents who have expressed concern were former IGP Tan Sri Ismail Omar and Datuk K, husband of singer Siti Nurhaliza, as they live just opposite the project site.

The protest letter, sent at the end of September, was raised by Rozmi Humaidi Zainal Abidin, the MPAJ Councillor for Zone 5, at the monthly council meeting in October.

His vehement protest on behalf of the residents and the community was finally accepted by the councillors.

The success of this protest goes to show that residents can succeed in voicing out their concerns if proper channels are used, such as through their residents’ associations, joint management bodies and management committees.

The authorities, especially MPAJ, has a moral and constitutional responsibility to protect the interests of the rate-paying community.

This responsibility should have been taken up by the Bukit Antarabangsa State Assemblyman Azmin Ali and the Ampang Member of Parliament Zuraida Kamaruddin. They have both remained silent on this issue.

The residents are not surprised since these public reps have not been forward and transparent in handling the issue of the massive development of Lot 850 at the foot of Bukit Antarabangsa, which to date have not been able to show the EIA, TIA and SIA reports

The hastily put-up notice at the last hour smacks of total disregard for the community’s interest. The community has a legal right to protest according to the MPAJ bye-laws.

What were the real reasons for this is anyone’s guess, including issues of transparency and corruption in high circles, something that the whole country is sick and tired of seeing happening daily. — @Forest

The Green Dude and friends living in the area have enjoyed calm and serene living in the hills of Bukit Antarabangsa. Given the environmental challenges, no new developments should be approved. The request, if approved, to amend the original Planning Permission will undoubtedly disrupt the social status quo and endanger the fragile ecosystem within the area.

Rejuvenating Muslim-friendly tourism for the future