Shell paves the way for carbon neutrality by 2065

Shell Malaysia and the Netherlands Embassy recently hosted a virtual forum in conjunction with the launch of Shell Malaysia’s “The Tree, The Sky, The Sun: A Pathway towards Malaysia’s Carbon Neutral Future”.

The launch event was attended by Dato’ Sri Tuan Ibrahim Tuan Man, (former) Minister of Environment and Water and Aart Jacobi, Ambassador of The Netherlands to Malaysia.

The Tree, The Sky, The Sun tells the story of how Malaysia could reach for the sky – carbon-neutral by 2065 – with its unique advantages of tree and sun. Shell’s story illustrates a technically possible yet challenging pathway for Malaysia to meet the goal of the Paris Agreement to keep the rise in global average temperature to well below 2°C above pre-industrial levels, with a stretch goal of 1.5°C.

Developed by Shell in consultation with key local stakeholders, Shell’s pathway was launched at a virtual forum gathering more than 1500 participants and stakeholders from the government, private sector, media, academia, non-governmental organisations, and energy consumers.

The launch also saw a roundtable discussion by the CEO Action Network, featuring energy leaders and representatives from Shell, The Ministry of Environment and Water, Climate Governance Malaysia, and Boston Consulting Group.

“It is exciting to see Malaysia having open and more transparent discussions on the true scale of the climate challenge and the actions needed for achieving carbon-neutrality,” said Ivan Tan, Chairman of Shell Malaysia.

“By publishing The Tree, The Sky, The Sun, Shell hopes to contribute to the national conversation about Malaysia’s energy transition and the framing of the nation’s priorities in the run-up to COP26 and beyond. This is in line with the global ambition embodied in Shell’s Powering Progress strategy to become a net-zero emissions4 energy business by 2050.”

Added Marco Winter, Executive Director of MDBC: “The Tree, The Sky, The Sun combines policymaking with science-based targets to help us all see the benefits and opportunities of a sustainable future more clearly.

“The support of everyone – from energy producers to energy consumers – will be critical for achieving the milestones described by Shell’s aspirational pathway.

“We hope the gathering will spur more informed conversations about how we can all contribute towards building a carbon-neutral energy system for Malaysia and the world.”

The pathway described by The Tree, The Sky, The Sun highlights five critical “increase levers” that are likely to have the greatest influence on moderating carbon emissions in Malaysia.

• Increase in forest acreage and density.

• Introduction and gradual increase in the carbon price.

The economy-wide transformation required to achieve a carbon-neutral state would be underpinned by carbon pricing or the external cost of carbon, which is phased in starting from 2026. It will coincide with the start of the 13th Malaysia Plan (2026 – 2030). This drives the reallocation of capital and resources toward low-carbon and energy-efficient choices.

By 2065, renewable sources of energy will dominate a deeply electrified energy system. Solar has become the country’s single largest source of energy, coal has been phased out, while the remaining natural gas in the energy mix acts primarily as a means of supporting the use of renewable energy sources.

Biofuel has displaced oil as the preferred liquid fuel for transportation and is used increasingly to meet the demand of difficult-to-electrify sectors such as aviation and shipping.

Gains in energy efficiency lead to a marginal increase in the country’s final energy demand, despite healthy economic growth during this period.

Any remaining emissions from the energy system are removed by nature or technology – reforestation of an additional 5.8 per cent of Malaysia’s landmass can capture up to 29 million tonnes of CO2 per year, effectively bringing forward Malaysia’s carbon-neutral date by 15 years to 2065.

Ultimately, the point at which Malaysia achieves carbon-neutrality depends on how aggressively these levers discussed were pursued in steering the economy towards a more sustainable post-pandemic recovery.

Other pathways are possible and depend on societal and policy preferences. Still, a significant shift in how society produces and consumes energy is required to limit the rise in global temperature and address the risks of climate change.

Crucially, it will take robust policy frameworks and more open public engagement to create societal support for action and enable the development of lower-carbon solutions and green technologies.

Strong collaboration across government, business, and society will be crucial to progress at the pace required for Malaysia’s energy system to be carbon-neutral by 2065. — @green 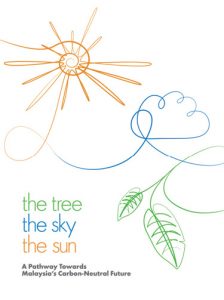